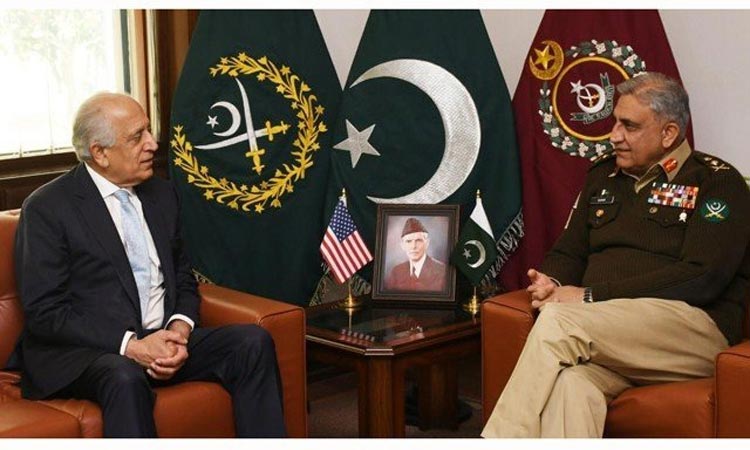 The meeting took place at General Headquarters (GHQ) in Rawalpindi in which matters of mutual interest were discussed, military’s media wing, the Inter-Services Public Relations (ISPR), said in a statement.

“Both reaffirmed the commitment towards the common goal of peace and stability in the region and agreed on continued engagement at multiple levels.”

The visiting dignitary, according to ISPR, acknowledged Pakistan’s ongoing efforts for enduring peace in Afghanistan and the region.

The development comes as Afghan government representatives and Taliban officials are due to resume their power-sharing talks, although battlefield clashes and targeted killings risk undermining efforts to end the war.

Pakistan facilitated a landmark deal between the US and Taliban signed on February 29, 2020. The deal envisages a road map of US troops’ withdrawal in return for Taliban promising not to let Afghan soil ever used again by terrorist groups.

But the deal hinges on the success of intra-Afghan dialogue, which will decide the political future of Afghanistan and pave way to end the 19-year old conflict.

The talks resumed in Qatar in September 2020 months after the Taliban reached an agreement with the United States allowing it to pull its troops out of Afghanistan and end its longest war in exchange for Taliban security guarantees.

The two Afghan sides got bogged down on procedures for weeks but in December they reached an agreement on the process, clearing the way for them to get down to the issues when they resume their negotiations on Tuesday.

The United States has been scaling back its presence in Afghanistan nearly 20 years after it intervened with its allies to overthrow the Taliban in the weeks after the Sept 11, 2001, attacks on US cities.

Afghan security officials expect the size of the US force to dwindle to about 2,500 troops early this year.