* To coincide with the news of the positive economic impact — which includes the creation of 6,000 construction jobs — a stunning new aerial rendering has been released of the park, which will feature 50 rides and attractions, including eight huge roller coasters and different zones containing medieval castles and an Aztec pyramid 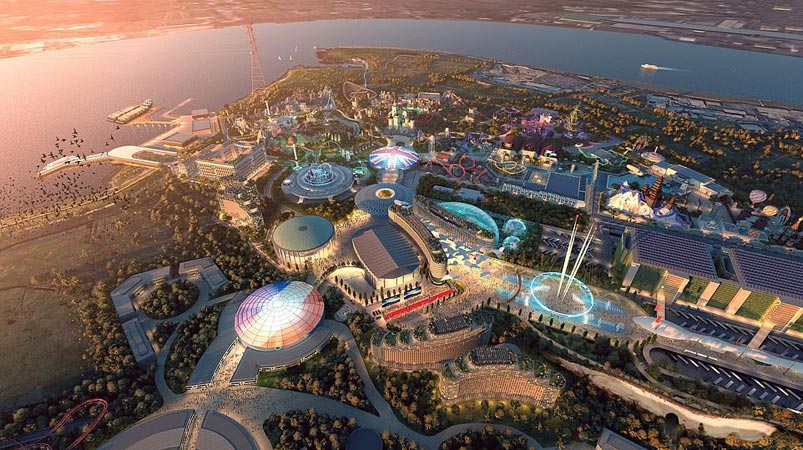 The London Resort, which has been dubbed ‘Britain’s Disneyland’, has claimed that it will generate £50 billion for the UK economy during its first 25 years of operation.

The park, which will be based in Kent between Gravesend and Dartford on the Swanscombe Peninsula, is set to open in 2024. The area on which the resort is being built is currently an 872-acre industrial site.

To coincide with the news of the positive economic impact – which includes the creation of 6,000 construction jobs – a stunning new aerial rendering has been released of the park, which will feature 50 rides and attractions, including eight huge roller coasters and different zones containing medieval castles and an Aztec pyramid.

Two of the domed rooftops display the British and French flags, indicating that there could be different cultural zones too.

The park will also feature a 2,000-seat theatre and a huge nightclub.

The firm behind the project, the London Resort Company Holdings (LRCH), has signed deals with ITV, the BBC and Paramount Pictures to include themed TV and movie attractions.

A previous map and statement released by LRCH showed how the park will be split into different themed areas that take visitors from the medieval period to the 23rd century. The zones are set to include The Studios, The Woods, The Kingdom, The Isles, The Jungle, Starport and High Street.

Two of the domed rooftops display the British and French flags, indicating that there could be different cultural zones too

A public consultation was recently held to get residents’ views on the development and it reportedly reached 120,000 members of the public. 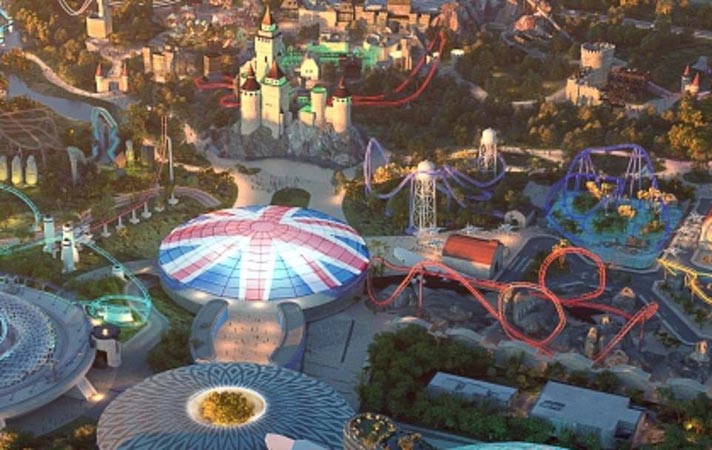 It showed that 73 percent of people support promises from the resort’s backers to enhance local wildlife habitats and support those that exist already.

And of those who took part, 65 percent agreed the resort would benefit the local area in the long term.

LRCH has now submitted its planning application to the Government for approval.

Comprising over 25,000 pages of reports, assessments and analysis, the Development Consent Order (DCO) details how this largely brownfield former industrial site will be transformed into ‘one of the most exciting destinations in the world’.

The park is projected to be one of the largest, single-site employers in the UK, with 17,000 employees by 2038.

It is also aiming to be the first carbon-neutral theme park, with the creation of park areas and wildlife habitats.

Commenting on the latest updates, chief executive PY Gerbeau said: ‘I arrived at this project eighteen months ago and it has been non-stop ever since.

‘We have revived, reviewed, and reprogrammed the entire venture. This will be so much more than just a theme park.’

The application confirms the intent to develop two theme park gates, a waterpark, conference and convention centre and e-Sports facility.

Over 3,500 hotel rooms will be created and two ferry terminals – one each side of the River Thames – will be built, along with back-of-house facilities, a visitor centre and a new road from the A2.

Crucially, the vast majority of the materials required to construct the resort will be delivered by river.

Mr Gerbeau continued: ‘We have built excellent relationships with many stakeholders and are working closely with the elected local Council leaders.

‘This has been an incredibly challenging journey and we look forward to working with the UK Government over the next twelve months.’

The London Resort will be the first European development of its kind to be built from scratch since the opening of Disneyland Paris in 1992.

If successful in securing development consent, construction could begin in 2022 with a view to opening in 2024.

The success of Disneyland Paris is a testament to the impact that a global theme park can have on the economy.

A report on the economic contribution of Disneyland Paris found that the attraction added €68billion to the French economy in the 25 years since opening.

The region in which the park is located, Seine-et-Marne, has had a €22.4billion boost.

The Government, through its Planning Inspectorate agency, has a period of 28 days in which they write to the local authorities and, together, assess ‘adequacy’ on the consultation and carry out an evaluation of the application before they accept or reject The London Resort’s submission.