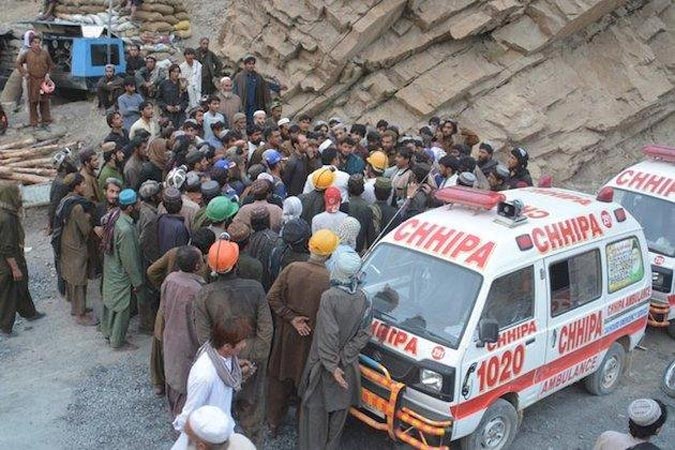 At least 11 colliers were killed after being abducted by armed men in Mach area of Bolan district on Sunday.

According to Levies sources, the victims were working in the field coalmine in Mach when they were kidnapped by the armed assailants, who took them to nearby hills and massacred them.

Moazzam Ali Jatoi, an official with the Levies Force, said six of the miners were dead on the spot, and five who were critically wounded died on the way to a hospital. Jatoi said an initial investigation revealed the attackers identified the miners as being from the Shia Hazara community and the gunmen took them away for execution, leaving others unharmed. No group immediately claimed responsibility for the attack.

According to Quetta Deputy Commissioner Murad Kaas, no case has been registered so far. A heavy contingent of police, Frontier Corps, and district administration officials reached the site after the incident.

Meanwhile, a large number of people, including relatives of the dead, blocked the National Highway with the bodies of miners. They demanded the provincial government to take all possible measures to arrest murders as soon as possible. The traffic between Sindh and Balochistan was disrupted with a lot of vehicles were stuck on the National Highway.

Prime Minister Imran Khan condemned the incident, referring to it as a “cowardly inhumane act of terrorism”. “Have asked the FC to use all resources to apprehend these killers & bring them to justice,” the premier said on Twitter. “The families of the victims will not be left abandoned by the govt,” he vowed.

Taking notice of the Machh coal field incident, Balochistan Chief Minister Jam Kamal expressed sorrow over the loss of life and sought a report from the concerned authorities. Kamal also directed the authorities to spare no effort in arresting those responsible for the terrorist attack, vowing for the elements involved in terrorist incidents to be brought to justice. The chief minister also directed for the best possible medical treatment for the injured and prayed for their speedy recovery.

Speaking to a private TV channel, Balochistan government spokesperson Liaquat Shahwani said the incident was an act of terrorism. “Investigative institutions are probing the incident from every angle to determine who is responsible for this,” he added.

The Balochistan government official said security in the area would be increased after assessing the situation. He vowed that those responsible for the incident would be brought to the book.

Speaking about the tragic incident, Balochistan Interior Minister Mir Ziaullah Langau said the victims of the attack on colliers by cowardly terrorists could not be identified. “This terrorism is an incident of sectarianism,” Langau added. “We are mourning today on the killing of poor [labourers]. Irrespective of the sect, race and religion, our innocent brothers were targeted. The evils behind the tragedy will be unveiled soon,” he said.

Minister for Interior Sheikh Rashid Ahmed while condemning the killings asked the Balochistan inspector general of police to submit a report on the incident. “Terrorists will not succeed in their nefarious objectives. Elements involved in the incident are not deserving of any laxity,” he said.

Minister for Human Rights Shireen Mazari said: “Indian funded terrorists in Balochistan getting [are] more desperate as development comes to province”. “Socio[economic] empowerment & Insaf for the Baloch are how we will defeat the terrorists,” she tweeted.

PPP chairperson Bilawal Bhutto-Zardari termed the incident as “the worst form of terrorism”. In a statement, Bilawal called on the government to take action and provide protection to miners working in the coalfields. The PPP chairperson also asked the federal and provincial governments to provide “compensation to the families of the miners and ensure that such incidents do not occur again”.