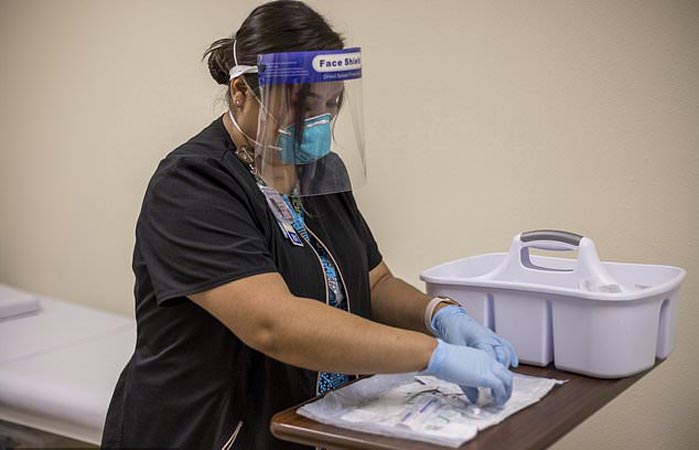 The news came during a hopeful time on the largest Native American reservation. Daily coronavirus cases were in the single digits, down from a springtime peak of 238 that made the Navajo Nation a US hot spot. The tribe, wanting to ensure a Covid-19 vaccine would be effective for its people, said it would welcome Pfizer clinical trials on its reservation spanning Arizona, New Mexico and Utah.

Right away, tribal members accused their government of allowing them to be guinea pigs, pointing to painful times in the past when Native Americans didn’t consent to medical testing or weren’t fully informed about procedures.

A Navajo Nation review board gave the study quicker approval than normal after researchers with Johns Hopkins University´s Center for American Indian Health made the case for diversity. Without Native volunteers, how would they know if tribal members responded to vaccines the same as others?

“Unfortunately, Native Americans have effectively been denied the opportunity to participate in these clinical trials because almost all of the study sites are in large, urban areas that have not done effective outreach to Native Americans,” said Dr. Laura Hammitt of Johns Hopkins.

About 460 Native Americans participated in the trials for the vaccine by Pfizer and its German partner BioNTech, including Navajos. The enrollment reflects a growing understanding of the role that people of color play in vaccine development and the push to rapidly deploy it to curb infections among populations that have been disproportionately affected by the virus.

Yet, few of the country’s 574 federally recognized tribes have signed on for the studies, a hesitation often rooted in suspicion and distrust. Many tribes also require several layers of approval for clinical trials, a challenge researchers aren’t always willing to overcome and don’t face in the states.

While vaccines from Pfizer and Moderna Inc. roll out across Indian Country, others are being studied.

In the Pacific Northwest, the Lummi Nation and the Nooksack Indian Tribe plan to participate in a vaccine trial from another company, Novavax Inc. A Cheyenne River Sioux researcher plans to enroll Native Americans and others in South Dakota in the Novavax trial and another by Sanofi and GlaxoSmithKline. On the Navajo Nation, Arvena Peshlakai, her husband, Melvin, and their daughter Quortnii volunteered for the Pfizer trials.

Arvena Peshlakai said the rumors were rampant: Navajos would be injected with the virus, and researchers would use plasma from people who got Covid-19. She was assured that wasn’t happening and let the words of her parents and grandparents guide her: Don´t let our struggles be your struggles, begin with our triumphs.

“What else am I supposed to do? Just sit back and say, `No, I don´t trust them´ and not try something new to see if we can find a breakthrough?” Peshlakai said. “We have to do something, we can´t just sit by and wait and hope and pray.”

She overcame her fear of needles to get the doses and keeps track of her well-being daily on an app. As trial participants, the family can get the vaccine if they initially received a placebo.

The Pfizer trials among the Navajo and White Mountain Apache tribes enrolled 275 people, about 80% of them Native American, Hammitt said. It wasn’t as many as researchers had hoped for, but she said it’s enough to compare immune and antibody responses in Native patients to others.