Climate extremes result in wildlife winners and losers in 2020 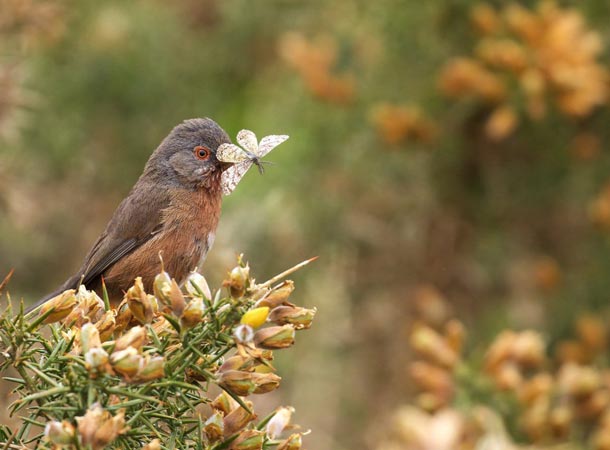 A year of climate extremes created winners and losers among wildlife – but lockdown gave some species a boost in 2020, the National Trust has said.

In its annual review of the year for wildlife at its sites around the country, the charity said the absence of people in the peak spring breeding season due to the pandemic lockdown gave nature a free rein in tourist hotspots.

They included peregrine falcons nesting in Corfe Castle, Dorset, a cuckoo heard in Osterley in west London for the first time in 20 years, and a buzzard which visited the orangery at Felbrigg Hall, Norfolk.

The absence of people at Blakeney Point was a boost for the tern colony, helping the birds to their most successful breeding season for 25 years, while curlew were heard in the Peak District in areas that are normally much busier.

But the National Trust said extreme weather as a result of climate change had a significant impact on UK wildlife in 2020.

Storms in June coupled with high tides and strong winds hit the little tern colony at Long Nanny, with nests washed away, while the tern colony at Strangford Lough in Northern Ireland also struggled this year.

But the mild winter with very little snow, and a long dry spring followed by the sunniest and driest May on record, created good conditions for some species to thrive, including some birds, butterflies and moths.

The mild winter was a boon for the Dartford warbler, which has seen its numbers increase from a low of just 11 pairs after two particularly cold winters in the 1960s to more than 3,000 pairs in the early 2000s.

The bird was knocked back again by the bitter weather of the Beast from the East two years ago, but did well this year, the National Trust said, and was seen at the Long Mynd in Shropshire in March for the first time in 20 years.

The warm dry spring resulted in a particularly good year for blossom, with many fruit trees coming into blossom two weeks earlier than normal, and a warm summer with regular rainfall delivered a good fruit harvest.

Warm winds brought record numbers of migrant moths from the continent in summer and early autumn, including the Clifden nonpareil, which has returned to southern England after becoming extinct in the 1960s and continues to extend its range.

It was also recorded at its namesake Cliveden, Berkshire, where it was first found in the UK in the 1700s.

But warmer winters may be hitting some butterflies and moths, because their parasites or predators survive better.

It was a mixed picture for plants, with the long dry period in May and June hitting early marsh-orchids and autumn ladies tresses at Golden Cap in Dorset but where green winged orchids flowered in their thousands.

The prolonged warm dry weather put ash trees under further stress making them more susceptible to ash dieback, with the Trust warning it was having to remove 40,000 trees as a result of the disease.

Heather that was already affected by drought conditions in 2019 was more susceptible to dieback caused by the heather beetle, which was not killed off in the warm, wet winter.

Elsewhere, with mild, steady conditions in autumn, many trees, shrubs and hedgerows produced plenty of acorns, conkers, sloes and rowan berries, and the prolonged sunshine also resulted in a good year for autumn colour.

Ben McCarthy, head of conservation and ecology restoration at the National Trust, continued: “The impacts of climate change are being felt by our wildlife.

“Already under pressure from pollution, habitat loss and inappropriate management, climate change magnifies many of these pressures.

“Changes to the seasons and changeable weather can play havoc with our wildlife, knocking the delicate balance of nature out of kilter with serious knock on effects for us all.”

He warned that while there would be winners such as the Dartford warbler expanding their range, there would be more losers whose numbers and range continued to shrink and some groups particularly vulnerable to climate change.

Keith Jones, climate change adviser at the National Trust, added that climate change was resulting in more frequent and sustained downpours, and species would move north as conditions warmed.

“We can’t ‘undo’ the changes to wildlife we are already seeing at our places but we can do everything we can to nurture nature,” he said.

The conservation charity said it was focusing on restoring landscapes such as blanket bogs to absorb carbon and protect nature and creating new habitats, including woodland, for wildlife – including species on the move.