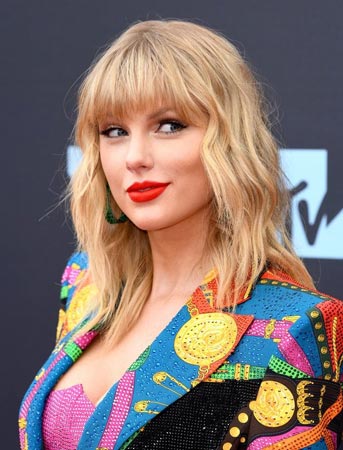 Captain Sir Tom Moore not only met the Queen in 2020 but found himself rubbing shoulders with pop royalty in making UK chart history.

At 99 years and 11 months Sir Tom, who was knighted by the Queen after raising millions for charity, in April became the oldest artist to score a number one single with his rendition of You’ll Never Walk Alone.

Days later he turned 100, making him the first ever centenarian to have a UK chart-topping single.

At the other end of the age scale Eilish, 19, made history of her own. The pop sensation had the biggest ever opening week for a James Bond title track when No Time To Die topped the charts in February. Pop titan Swift enjoyed an enormously successful year, with two number one albums in five months. Folklore, her first of two surprise albums, topped the charts as did Evermore, which arrived with little warning this month.

Swift is the first artist to have two studio albums at number one in the same year since Rihanna in 2012.

Grande scored the most UK number one singles of the year with two, topping the charts in May with Rain On Me, her dance-infused duet with Lady Gaga, and in October with Positions.

Carey, the so-called Queen of Christmas, set a new record for the song with the most weeks in the top 40 before reaching number one.

Her All I Want For Christmas Is You has been a staple of the festive period since its 1994 release, but missed out on that year’s Christmas top spot to East 17’s Stay Another Day.

But the song finally went to number one for the first time this month, having spent a total of 70 weeks in the top 40.

And 2020 was a year for veteran stars to shine.

The late Dame Vera Lynn re-entered the charts with her greatest hits in May when she was 103, making her the oldest artist to ever have a top 40 album.

In September, the Rolling Stones took top spot with a reissue of their 1973 album Goats Head Soup, becoming the first band to reach number one on the Official Albums Chart in six different decades.