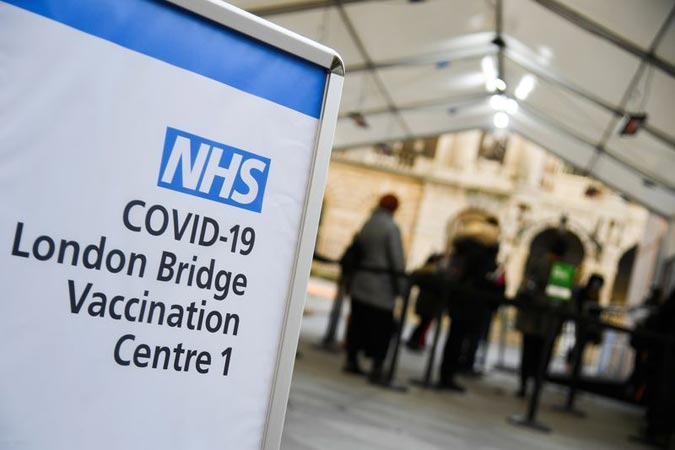 Britain said on Wednesday it would prioritise making sure that more people receive their first dose of a Covid-19 vaccine quickly over giving a second shot to those who have already had one, a change in strategy as the country battles record numbers of new coronavirus cases.

The decision will apply to the newly approved AstraZeneca/Oxford vaccine, as well as the Pfizer/BioNTech shot, which was rolled out in Britain three weeks ago. The first recipients of the latter have just started receiving their booster shots.

The British regulator approved AstraZeneca and Oxford’s vaccine on Wednesday, saying a gap of three months between shots could boost its efficacy.

Developers of the vaccine have said that quick deployment will help reduce hospitalisations from Covid-19 as daily cases topped 50,000 for the first time on Tuesday.

The dose interval for the Pfizer vaccine in Britain was changed from 21 days to “at least 21 days” on Wednesday, and for both vaccines, the second dose was advised to be given up to 12 weeks later.

“This approach will maximise the benefits of both vaccines,” a health ministry spokesman said.

“It will ensure that more at-risk people are able to get meaningful protection from a vaccine in the coming weeks and months, reducing deaths and starting to ease pressure on our NHS.”

Pfizer, sounded more cautious on the prospect of shifting the schedule of the second dose of the vaccine, noting it had not been evaluated on different dosing schedules.

“There are no data to demonstrate that protection after the first dose is sustained after 21 days,” it said in a statement, adding the implementation of alternative schedules should be closely monitored.

“While decisions on alternative dosing regimens reside with health authorities, Pfizer believes it is critical… to ensure each recipient is afforded the maximum possible protection, which means immunisation with two doses of the vaccine.”

Britain has said the new strategy still means everyone will receive a second dose within 12 weeks of the vaccine.

AstraZeneca has said that the MHRA’s approval of a two-dose regime, with 4-12 weeks between the first and second dose, was the “best vaccination strategy” for the shot.

The government said it would also not recommend one vaccine over another for different cohorts of the population, even though data on the Oxford/AstraZeneca vaccine’s efficacy in older people is currently limited.