* New data shows FATA and KP suffer most from violence, accounting for over 50% fatalities 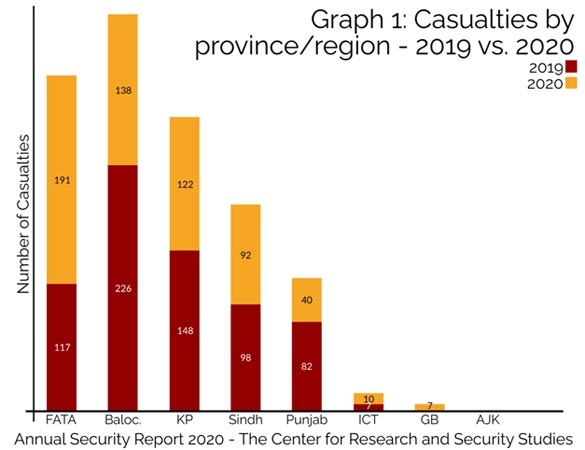 Within the last year, Pakistan witnessed a further 12% drop in violence-related fatalities, continuing a trend from 2015, with 600 fatalities reported from terror and counter-terror related incidents. Erstwhile FATA suffered the most number of fatalities, followed by Balochistan and KP. KP and FATA combined account for over 50% of violence-related deaths in the country in 2020. This data was collated and compiled by the Centre for Research and Security Studies (CRSS) in Islamabad.

Former FATA accounted for nearly third of violence-related fatalities this year at 191, a 63.2% rise from 2019. Although KP (excluding FATA) recorded 122 fatalities against 148 last year, the combined fatalities in KP and former FATA are more than 50% of the total fatalities from violence in the country this year. Balochistan recorded a 38.9% drop in violence from 226 to 138. There was a nominal drop in Sindh, and in Punjab, the fatalities dropped by more than half, from 82 in 2019 to 40 this year (table 1).

A total of 101 security operations were carried during this year that left 228 outlaws dead. In contrast, there were 260 terror attacks reported this year (table 2), which is a nearly 30% drop over last year’s 370 terror attacks. A significant drop in suicide attacks were also recorded this year – two in 2020 against nine in the year prior. Ten persons lost their lives from two suicide attacks this year compared to 56 persons in 2019.

Outlaws (including militants, insurgents, and criminals) suffered 29.9% more fatalities this year at the hands of law enforcement operations, security operations, and other clashes. Civilians again accounted for the largest group suffering fatalities from violence this year, though there was a 27.1% drop (table 4).

The separatist groups, Baloch Raaji Aajohi Sangar (BRAS), other members of the Balochistan Liberation Army (BLA) and Baloch Liberation Front (BLF) in Balochistan, and Sindhudesh Revolutionary Army (SRA) in Sindh escalated their violence during this year claiming 48 lives in both provinces combined. The militant outfits Tehreek-e-Taliban Pakistan (TTP), its splinter group Jamat-ul-Ahrar (JuA), and Islamic State (IS) also claimed responsibility for several attacks that left 28 persons dead. There were attacks carried out by militants across the Afghanistan border specifically targeting Pakistan’s security forces. 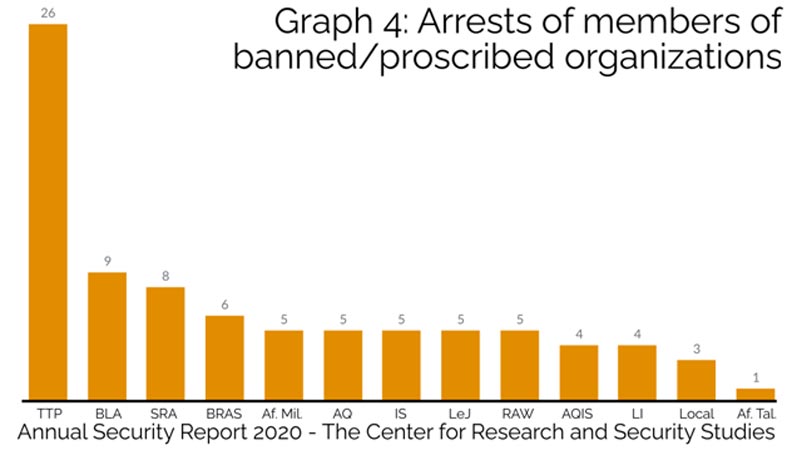