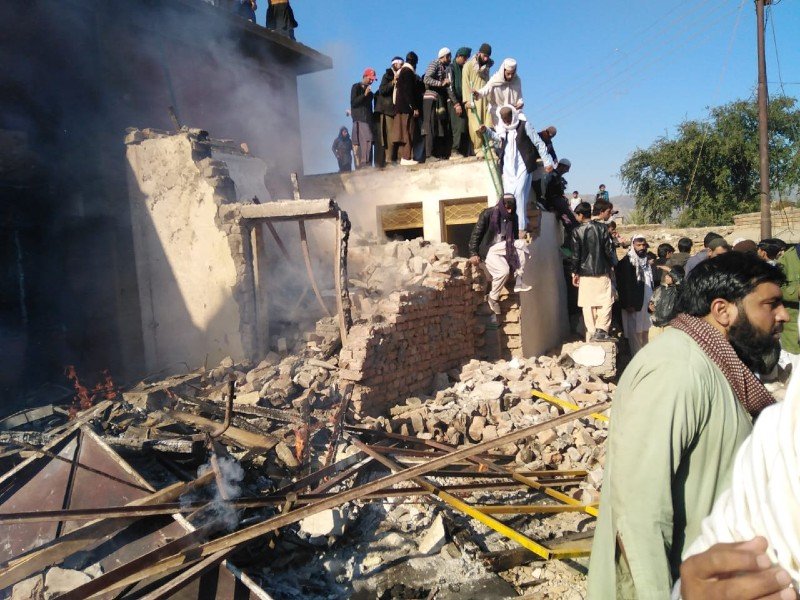 Police arrested 14 people in overnight raids and registered a case against 350 people after a Hindu shrine was set on fire and severely damaged by a mob led by supporters of a cleric in Khyber Pakhtunkhwa’s Karak district, officials said on Thursday.

The Krishna Dwara temple is situated in Karak’s Teri union council. It came under attack by hundreds of residents who set fire to the building.

The miscreants surrounded and vandalised the temple for hours but the police were missing from the scene.

In July 1919, Guru Shri Paramhans Dayal was laid to rest at the site and a temple was built there. Muslim residents of the area closed the temple after the Partition in 1947.

In 2015, the Krishna Dwara temple was restored on the orders of the Supreme Court of Pakistan.

The Hindus and the Muslims signed an agreement on December 22 agreeing that the renovation of the temple would not exceed the specified area.

Today in Pakistan.
A charged mob destroyed a Hindu temple by setting it on fire and razing it to the ground in Khyber Pakhtunkhwa district of Karak.

The incident took place after a JUI-F rally was held nearby where speakers delivered fiery speeches. #NayaPakistan #Pakistan pic.twitter.com/9iX2K3ipux

Worship places belonging to the Hindu community have been desecrated in Pakistan in the past too.

In October, a group of men vandalised idols at a temple in Sindh’s Nagarparkar. A suspect arrested later told the police he had done it for money.

A pre-Partition Hindu temple was demolished in Karachi’s Lyari on August 16. “The Hanuman temple dated back almost 200 years and was a worship place for several families living in the neighbourhood,” Pakistan Hindu Council Patron-in-Chief and MNA Dr Ramesh Kumar Vankwani said at the time.

In February 2019, an arson attack on a Hindu temple had spread unrest in Kumb in Sindh’s Khairpur district. Unidentified people had entered the Sham Sundar Shewa Mandli temple and set fire to three sacred books and idols.