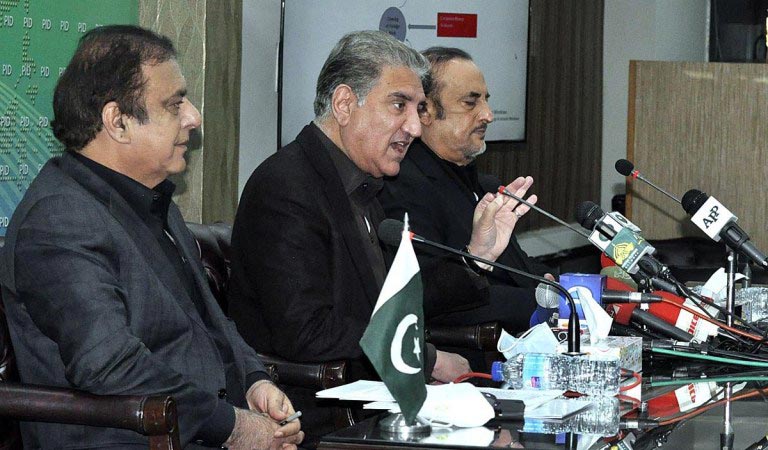 Interior Minister Sheikh Rashid Ahmed on Wednesday said formal process for cancellation of Nawaz Sharif’s passport will be initiated on February 16. He said the passport of former prime minister, who is currently staying abroad, will be cancelled after due process on February16.

Talking to media, Sheikh Rashid said that he had earlier indicated that Pakistan People’s Party (PPP) would duly contest Senate elections and added it meant that PPP would also participate in by-elections. He said that those opting for ‘iqama’ apparently had no regard for their motherland. Criticizing the opposition, the minister said they were now united to save their plundered public money.

He said the opposition had been ‘exposed’ as money launderers and people who obtained iqamas because they were not honest with the country. “Why did all these people use to take iqamas? If I as the interior minister obtain an iqama, it means there is something fishy and I don’t have faith in my land,” he said.

Asked by a reporter “who is next” after PML-N senior leader Khawaja Asif’s arrest on Tuesday, Rashid said it wasn’t yet known but added: “[We] will cancel Nawaz Sharif’s passport on February 16.” He did not provide any details.

Meanwhile, Foreign Minister Shah Mahmood Qureshi said that the opposition leaders should produce money trail to the National Accountability Bureau instead of playing the card of political victimization. “Whenever NAB acts, it is called political victimization or is threatened to siege. In every civilized society, no one is above law…It feels Khawaja Asif could not satisfy NAB on the allegations of money laundering and assets beyond means,” he said addressing a press conference here along with Information Minister Senator Shibli Faraz and Advisor on Parliamentary Affairs Dr Babar Awan.

The foreign minister said instead of hurling allegations, the opposition leaders should come up with evidences to nullify the NAB’s allegations. He told media that Khawaja Asif was invited by NAB to explain his position in the case and it was only he who could respond to the queries raised on his properties and assets.

The foreign minister said following the arrest of Khawaja Asif, the facts were becoming clearer as why the opposition had been linking its support to FATF legislation with the abolition of 34 or 38 clauses in NAB law. “Today, I understand…We were astonished as what was the link between NAB law and FATF. As the things are opening up, it shows they were using FATF as shield to amend NAB law,” the foreign minister remarked.

To a question, the foreign minister said the government was ready to talk to the opposition at the parliamentary forum, except on the NRO and NAB law. He made it clear that Prime Minister Imran Khan would not resign by January 31, as demanded by the opposition, so they should go on with their agenda. He said the PDM had been shattered following the PPP’s decision on Tuesday. However, he questioned the PPP as if they wanted to quit assemblies, why they decided to take part in bye-poll.

Minister for Information and Broadcasting Senator Shibli Faraz said the past rulers had used the national institutions for their personal interests, and with their help and facilitation looted the national wealth. He said the former rulers’ only objective was to mint money and in the process they made the common people poorer. He said the opposition parties had requisitioned the Senate session with a six-point agenda. “They are in fact trying to misuse the Upper House of Parliament to escape from accountability for their misdeeds but they would not succeed. They will be questioned by the treasury benches about the corruption committed by their leadership. Everyone is bound to answer to the questions raised by the courts or any other relevant institution about their wrongdoings,” he remarked.

To a question, he said any Pakistani citizen could approach the National Accountability Bureau for investigation against any person having assets beyond known sources of income, but no probe could not be initiated on any news published in the press.

Senator Shibli Faraz said the dream of Pakistan Muslim League-Nawaz and Maulana Fazalur Rehman to destabilize the government has been shattered by the bouncer of Pakistan People’s Party. In a tweet, Shibli Faraz said that the balloon of Pakiatan Democratic Movement set up to get personal benefits has already burst. He said that Maulana Fazlur Rehman and Maryam Nawaz, who are not members of the Parliament were the twelfth players in game of politics.