Mob burns down shrine of Hindu saint in Karak 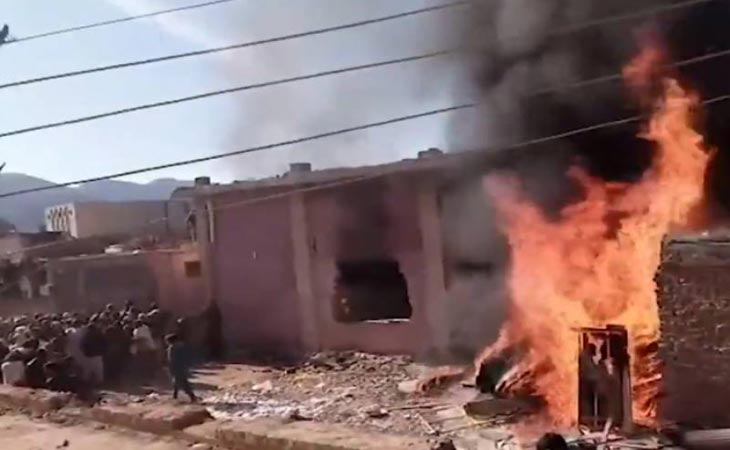 A mob vandalised the samadhi (shrine) of a Hindu saint and subsequently set it on fire in the Karak district of Khyber Pakhtunkhwa on Wednesday, a private TV channel reported.

“More than a thousand people led by some local elders of a religious party held a protest and demanded the removal of the Hindu place of worship,” a local resident present at the site during the violence told the TV channel, adding that after delivering speeches, they moved towards and attacked the shrine, which was built before 1920. He said that the mob that was chanting slogans ‘set the shrine on fire’ before demolishing it as well as an under-construction house owned by a member of the Hindu community. “Residents of nearby villages announced a protest demonstration a few days earlier which was completely ignored by police,” the resident said, accusing the police of having failed to protect the property.

The incident took place in a far-flung area of Karak’s Teri town, with police saying law enforcement personnel dispersed the mob after the violence. Videos posted on social media showed a large crowd present at the site, chanting slogans and tearing down the walls of the property. Smoke and fire could be seen in the visuals.

Karak District Police Officer Irfanullah confirmed the attack, saying the incident had created a law and order situation in the area. He said the residents had issued a call for protest, but with the guarantee that they would remain peaceful. However, a cleric incited the crowd following which they proceeded to attack the shrine.

The police officer said the shrine’s keeper had ‘secretly’ acquired a house next to the property. The protesters were against its construction because they assumed the shrine was being expanded. There are no Hindus in the area and it was the home of the single samadhi, the DPO explained.

He said the mob destroyed the under-construction house due to which the shrine next to it also suffered damaged ‘collaterally’. He said that a first information report (FIR) of the incident had been registered but no one had been arrested so far.