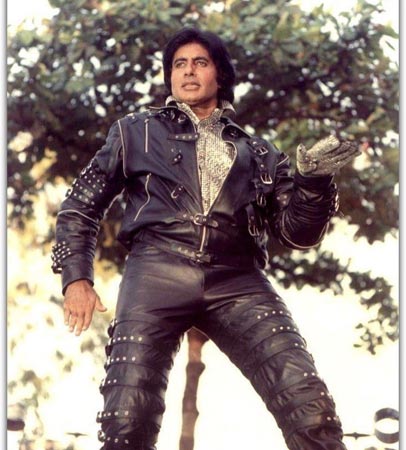 Late pop star Michael Jackson was not just an icon in the world of music, but also when it came to dance and fashion.

Actor Amitabh Bachchan reminisced about the time he was asked to ‘replicate’ the King of Pop in his film, Ganga Jamunaa Saraswati, and called it a misfire.

Sharing a picture of himself wearing a black leather jacket and leather pants, Amitabh wrote, “…when Manmohan Desai thought that I could replicate MJ in our film Ganga Jamuna Saraswati.. What a failure I was!!” Actor Ranveer Singh seemed to disagree that Amitabh’s attempt was a failed one, and dropped a crown emoji in the comments section. Fans also showered love. “What an amazing photo,” one wrote. “Still u are the best sir,” another commented. Many also dropped fire and heart emojis on the post.

Despite a raging pandemic, Amitabh has been shooting for the popular game show, Kaun Banega Crorepati, which he is the host of. The show is currently in its twelfth season.

Earlier this year, Amitabh made his digital debut with Gulabo Sitabo. The film, directed by Shoojit Sircar and also starring Ayushmann Khurrana, was originally slated for a theatrical release but came out on Amazon Prime Video due to the Covid-19 pandemic. In July this year, Amitabh and his family – son Abhishek Bachchan, daughter Aishwarya Rai Bachchan and granddaughter Aaradhya – tested positive for the coronavirus. However, they recovered after a few days.