Pakistan can convince Taliban to agree to ceasefire: Afghan FM 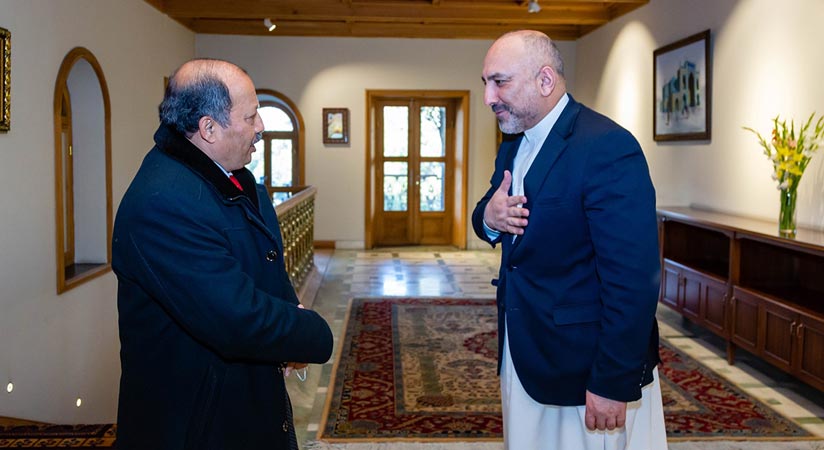 Afghan Foreign Minister Haneef Atmar said on Tuesday that Pakistan could play an influential role in convincing the Taliban to agree to a ceasefire, which is the critical component of ending violence and restoring peace in Afghanistan.

An Afghan Foreign Ministry statement said that the Pakistani envoy briefed the Foreign Minister Atmar on the latest developments regarding the Taliban representatives’ visit to Pakistan, highlighting Pakistan’s constructive role in the Afghan peace process.

“Foreign Minister Atmar appreciated the efforts and contributions of the Pakistani Prime Minister Imran Khan, Foreign Minister Shah Mahmood Qureshi, and Ambassador Mansoor Khan in supporting the peace negotiations,” according to the statement.

The Pakistani envoy met the Afghan foreign minister after foreign ministries traded harsh words over a video of Taliban leader Mullah Abdul Ghani Baradar during his visit to Pakistan.

Atmar pointed out that Islamabad had an extremely crucial role in advancing the Afghan peace process, adding that Pakistan could play an influential role in convincing the Taliban to agree to a ceasefire, which is the critical component of ending violence and restoring peace in Afghanistan.

On his part, the ambassador of Pakistan to Kabul said that the “growing level of violence in Afghanistan was a matter of concern for Islamabad,” as noted on several occasions by the Prime Minister of Pakistan.

Khan added that the talks’ resumption in Doha, expansion of people-to-people relations, and strengthening economic and commercial ties between Afghanistan and Pakistan would be vital in enhancing the peace process, according to the statement.

The Pakistani ambassador also discussed the allocation of more visas to the Afghan people by the Embassy of Pakistan, informing that the number of counters at the embassy increased from 10 to 17, resulting in an increased number of visas issued by the embassy and consulates.

An online visa application system has also been created through which visas will be sent to applicants via email.

On Sunday, Pakistan showed concern at recent “negative comments” made by Afghan officials that are damaging for the Afghan peace process.

The Foreign Office spokesman was apparently responding to an Afghan Foreign Ministry statement which had shown “great concern” at the Taliban political leader Mullah Ghani Baradar meetings with their followers during their visit to Pakistan.

The Afghan Foreign Ministry on Friday raised objections over Baradar’s meetings with the Taliban supporters in Pakistan after a video circulated on social media showed Baradar meeting with the Taliban most probably at a hospital where he met Taliban patients.

The statement claimed that the “overt presence and activities of Afghan insurgent elements and their leaders in Pakistani territory clearly violate Afghanistan’s national sovereignty and continue to cause crisis and instability in the region, posing a serious challenge to achieving sustainable peace in Afghanistan.”

The Pakistani foreign ministry spokesman’s statement did not mention the Afghan Foreign Ministry’s statement about Baradar but said “we are concerned about some negative comments which continue to emanate from certain officials as well as unofficial Afghan circles.”

“We would continue to emphasize the mutually agreed fundamental principle that all bilateral issues including security and intelligence matters should be addressed through relevant bilateral forums and channels,” the spokesman said and pointed out that Pakistan’s efforts are acknowledged and appreciated by the Afghan society and the international community.

“We wish to highlight that the public blame game is detrimental to the Afghan peace process as well as to our shared efforts for enhancing bilateral cooperation,” the spokesman said.