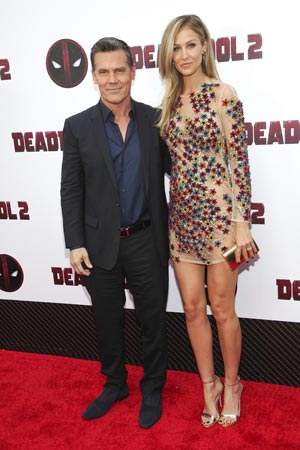 Welcome to the MCU, little one. Avengers actor Josh Brolin and his wife Kathryn Boyd just welcomed their second baby into the family. Kathryn gave birth to her “lil angel” on Christmas Day—several days past her due date.

Earlier this month, the denim designer gushed over her bundle of joy, writing on Dec. 19, “we love you so much now get on out here already!!!” She then added, “Thought today would bring a healthy dose of drama. Buttttt no…. nope. Still pregnant. Just in case you were wondering. Stilllll pregnant.”

The 33-year-old mom originally announced her pregnancy in July,

teasing on Instagram, “The Brolin’s are a growin’ !! Our little December babe is on the way….”

As for Josh, it seems he was counting down to their baby’s birth by spending some time in the nude. Earlier in December, the actor shared an all-too-revealing picture of himself on Instagram, along with the caption, “At the end of the day a life will judged [sic] by how often you were naked. Nobody told they meant metaphorically.”

The photo was taken by Kathryn, proving that the parents still like to have a little fun.

The pic included the couple’s first child, 2-year-old Westlyn Reign Brolin. The 52-year-old dad nicknamed the daughter Bean and called her a “flawless gem” when she was born in 2018.

Josh also has two adult children, Eden and Trevor, with actress Alice Adair and none with his other ex-wife, Diane Lane.

On Nov. 3, the Dune star wished Bean a happy second birthday in a long, poetic post on Instagram. “In 2 years you have transformed this family,” he wrote. “And when you tilt your hairy head on my cheek, and along with it a barely audible exhale, the ego melts and in a moment trickles mindlessly into the nowhere where it belongs. Your mad looks, happy, surprised, confused, sad fill me with everything a Nobel prize is made of. You are my Medal of Honor, my gold star, my Olympic win.”

The Oscar nominee continued in his tribute, “Two years old and your soul shines like you’ve been here a hundreds times before. You have stories that live in your pupils and I will sell out the rest of my days in anticipation of hearing them eventually sculpted through your words and out of your perfectly cherubic face. We are lucky to know you, little girl.”

During quarantine, Josh has brought Westlyn to visit her grandparents (that would be James Brolin and Barbra Streisand), whom he said live next door. As the legendary singer shared in April, “I just love the sign that Josh and Kathryn painted yesterday when they came to see us with our little grandchild Westlyn!” Now she has one more grandchild to fawn over.