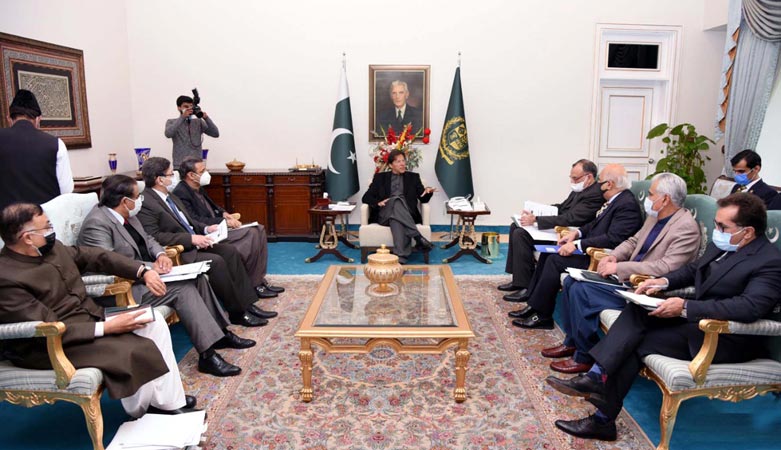 Prime Minister Imran Khan on Monday said that foreign agencies and ‘sponsored people’ are running a campaign against state institutions on social media, adding that the government will go after all such people.

At a meeting with federal ministers, special assistants and advisers in Islamabad, the prime minister said politicians pointing fingers at the state institutions can never be considered as flag-bearers of democracy. He said all pillars of state, within their own jurisdiction, were working for development of the country. He said strengthening of state institutions is vital for continuity of democracy.

Referring to the attack on the Frontier Corps in Balochistan a day ago during which seven brave soldiers embraced martyrdom while fighting with terrorists, Imran Khan said that the army is a state institution and protecting it is a national responsibility, per sources. “We have to give a befitting response to the anti-military narrative,” he said, and directed his government to ensure the safety and security of the armed forces and other institutions in the country.

The prime minister also directed the government to probe JUI-F’s chief Maulana Fazlur Rehman’s assets, saying that his ‘corruption should be exposed’. He said that the opposition does not have an interest in the welfare of this country but they are working for their own interests. “We are not under any pressure from the opposition’s movement,” he said. “Their only aim is to get an NRO,” he maintained.

During the meeting, the premier was also briefed about several measures taken by the authorities to address the prevailing gas shortage in the country. PM Imran Khan was also appraised of the government’s initiatives on reforms in the energy sector. The meeting discussed the supply of electricity and gas to industries as well as power supply and demand in the country.

Prime Minister Imran Khan said that the government was working on targeted subsidies for the provision of cheaper electricity to consumers. He said that as energy sector was very important for country’s economy, the government’s focus was on fulfilling the energy needs of all sectors.

The prime minister, who was given a detailed briefing about the current situation of energy sector in the country, expressed his satisfaction.

Regarding the renewable energy policy, Umar Ayub Khan told the meeting that due to this policy the confidence of investors had increased and they were showing deep interest of investment in the sector.

Special Assistant to PM Nadeem Babar told the meeting that the timely measures of the government had benefitted gas consumers across the country.

Prime Minister Imran Khan, describing the ML-1 (Main Line One) project an excellent example of Pakistan-China friendship, said that besides establishing the international standards’ modern communication infrastructure, it will create opportunities of industrial development and jobs in the country. He said that the project, which was part of Pakistan China Economic Corridor (CPEC), will integrate the country’s ports with land routes, enabling Pakistan to timely export its products in the international market and earn precious foreign exchange.

The prime minister expressed these views while presiding over a review meeting of ML-1 project of CPEC.

The prime minister, who was briefed in detail about the ML-1 project and the current status, expressed his satisfaction over the progress made so far. He said that since ML-1 was most expensive among the CPEC projects in terms of cost, it will add a new chapter of relations between Pakistan and China.