Turkey warns Libya’s Haftar and supporters against attacking its forces 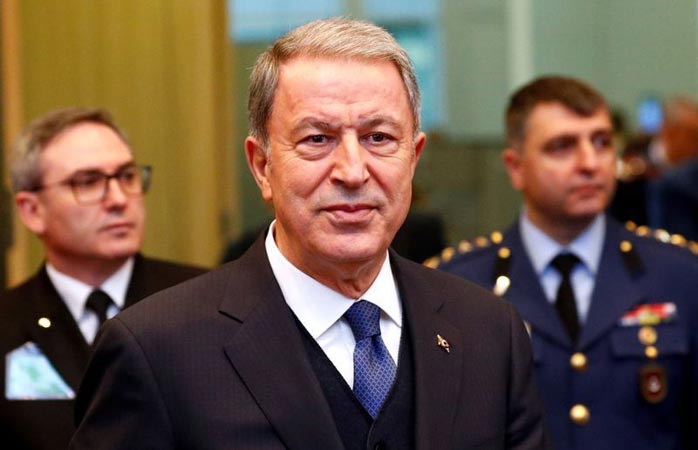 Turkish Defence Minister Hulusi Akar warned on Sunday that the forces of Khalifa Haftar and their supporters based in eastern Libya would be viewed as “legitimate targets” if they attempted to attack Turkish forces in the region.

Turkey is the main foreign backer of Libya’s internationally recognised Government of National Accord (GNA) based in Tripoli, which for years has been fighting Haftar’s Libyan National Army (LNA). The LNA is backed by Russia, the United Arab Emirates and Egypt.

In October, the GNA and LNA signed a ceasefire agreement and the United Nations has been pushing a political dialogue aimed at elections next year as a solution. Russia on Wednesday called for international efforts toward a peace settlement in Libya to be intensified.

Speaking during a visit to Turkish troops in Tripoli, Akar said Haftar had recently started making calls targeting Turkish forces in Libya and calling for attacks on Turkish troops, and also called on all parties to support political talks instead.

“This war criminal, thug Haftar and his backers should know that in the event of any attack attempt waged on Turkish forces, the killer Haftar’s forces will be viewed as legitimate targets everywhere,” Akar said.

“They should get this in their heads. If they do something like this, they will have nowhere to run,” he said. “Everyone should contribute to reaching a political solution here. Any move other than this is wrong.”

Turkey has sent military personnel and equipment to the GNA, helping to turn the tide of the war in Libya, while engaging in talks with Moscow for a solution to the conflict between the GNA and LNA.

Both sides have stopped short of withdrawing forces from the frontline, as demanded by the truce. A panel of U.N. experts has cited the foreign supporters of both sides as breaching an arms embargo on Libya.

Last month, Turkey and Germany traded barbs over the search of a Turkish freight ship by a European Union military mission in the Mediterranean aimed at enforcing the Libyan arms embargo, in a move Ankara called illegal.

This month, the LNA also intercepted a Turkish ship, under a Jamaican flag, heading to the port of Misrata, prompting an angry rebuke from Ankara. The ship was later released.