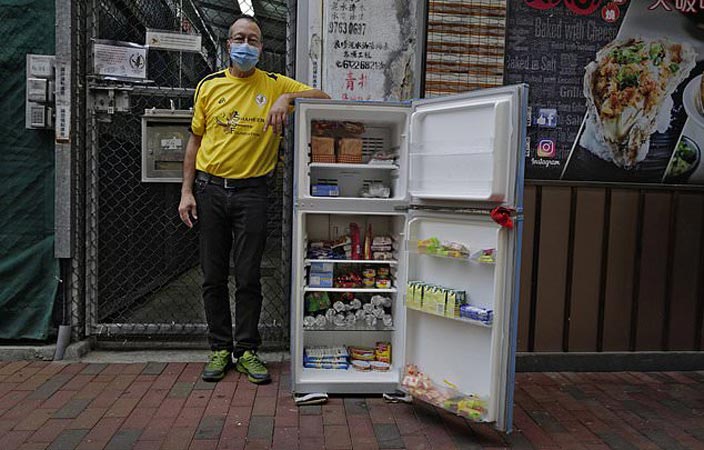 Most people who head to Woosung Street in Hong Kong´s old-school neighborhood of Jordan are visiting its popular restaurants serving everything from curries to seafood. Others may be headed for a lone refrigerator, painted blue, with a sign that reads: “Give what you can give, take what you need to take.” The door of the fridge sitting outside a hockey academy opens to reveal it is stuffed with packets of instant noodles, biscuits, tins of food and even socks and towels for anyone who may need them.

Ahmen Khan, founder of a sports foundation on the same street, said he was inspired to create a community refrigerator after seeing a film about others doing the same thing. He found the refrigerator at a nearby refuse collection point and painted it blue.

“It´s like a dignity, that when you go home, you open your fridge to get food,” Khan said. “So I want the people to just feel like that. Even if it´s a street, it´s their community, it´s their home, so they can simply just open it and then just put food there, and collect the food.”

Khan´s blue refrigerator project went viral on social media and people have been dropping by to leave food inside.

Janet Yeung stopped by recently with a plastic bag filled with biscuits, instant noodles and snacks. She stacked them carefully inside.

“I think doing good deeds does not need to be on a large scale,” Yeung said. “A small act can already show our kindness, and contribute to this world.”

A resident who would only identify himself as Yeung (no relation to Janet Yeung) is one of the people benefitting from the blue refrigerator, from time to time helping himself to some food or even masks left by donors. “Those who are really in need can take things from the fridge whenever they want without any worries, as the fridge is here 24 hours a day,” he said.