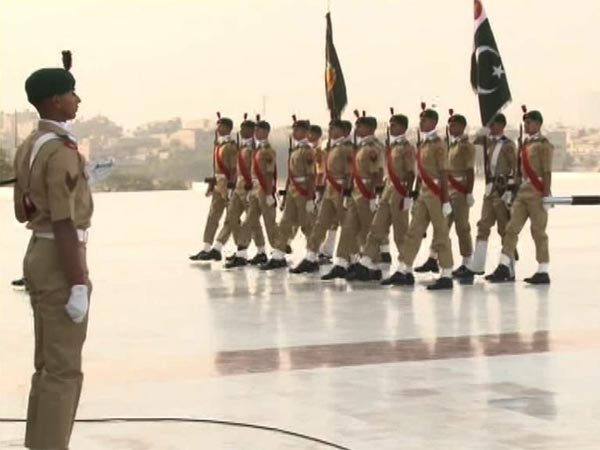 The nation celebrated the 144th birth anniversary of the founder of Pakistan, Quaid-i-Azam Mohammad Ali Jinnah, on Friday with traditional zeal and fervour.

Mr Jinnah was born on December 25, 1876, in Karachi. The birth anniversary is a public holiday and the national flag was hoisted on principal government buildings throughout the country. The day dawned with special prayers for the security, progress and prosperity of the country, while a change of guards ceremony also took place at the Mazar-e-Quaid in Karachi. Sindh Governor Imran Ismail and Chief Minister Murad Ali Shah visited the Quaid’s mausoleum where they offered Fateha and laid floral wreaths together. Special events were arranged to highlight and promote the ideas and views of the Quaid-i-Azam during the day.

In their separate messages to the nation on the occasion, the top political leaders urged the people to follow in the footsteps of the Quaid in all walks of life and hold on to ‘courage and hope’ while coping with the difficulties of the coronavirus pandemic.

In his message, Prime Minister Imran Khan paid tribute to Jinnah, saying, “In the modern history of mankind, there are a few people who garnered such a wide popularity as our Quaid did. His determination to carve a nation out of chaos and relentless deprivation was miraculous and insuperable against all odds and challenges.”

He urged the nation to “pay a befitting homage to our great Quaid by following his footsteps in all walks of our lives.

“Let us live the Quaid’s ideals of Unity, Faith and Discipline with a renewed national spirit so that we make this country rise above all seen and unseen challenges.”

President Arif Alvi in his message said, “We should reaffirm our commitment to building a state that respects the diversity of its people and provides equal opportunities to its citizens irrespective of their religion, caste, creed or colour.” He asked the nation to also remember people of Indian-occupied Kashmir on this occasion, who he said “are being subjected to the worst kind of state terrorism for over seven decades”.

Army Chief Gen Qamar Javed Bajwa said the nation was celebrating the Quaid’s birth anniversary with “great reverence and commitment upholding his message of hope, courage & confidence”. “Faith, Unity and Discipline shall always remain guiding principles of our great nation,” the ISPR quoted him as saying.

Foreign Minister Shah Mehmood Qureshi shared a quote by the Quaid to “serve as a reminder to us all, during these trying times of global pandemic”: ‘My message to you all is of hope, courage and confidence.’ PPP chairperson Bilawal Bhutto-Zardari too paid tribute to the Quaid for founding the nation through a peaceful and democratic struggle, but he said Jinnah mission “is yet to be taken to its conclusion”. The nation’s founder’s mission was the creation of “a strong Muslim-majority nation based on equality that is a role model for the entire ummah”, the PPP leader added. Bilawal also said “instead of making the country an experiment and training factory for the selected and puppets”, the country needed a strong leadership that adhered to the Quaid’s democratic ideals.

Human Rights Minister Shireen Mazari in a tweet said remembering the Quaid’s struggle was easy, “but the challenge is to follow & fulfil his vision for Pakistan – the vision he stated so clearly on every aspect of national life”. Mr Jinnah was a lawyer by profession and a politician. He served as the leader of All-India Muslim League from 1913 until Pakistan’s independence on Aug 14, 1947, and then as Pakistan’s first governor general until his death on Sept 11, 1948.