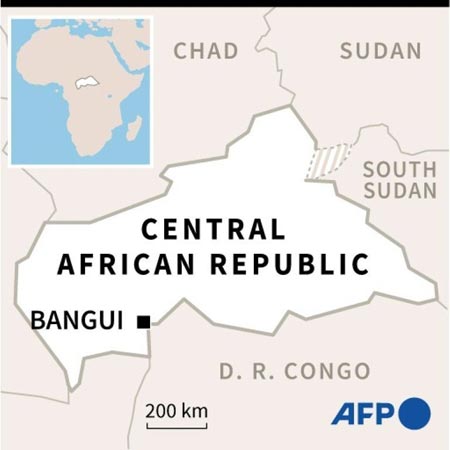 Voters in the Central African Republic head to the polls on Sunday, with incumbent President Faustin Archange Touadera on course to win a second term in an impoverished country haunted by violence.

In the week before voting day, Touadera accused his predecessor Francois Bozize of plotting a coup, a militia briefly seized the country’s fourth biggest town, and Russia and Rwanda sent military personnel to help shore up his government.

The mood in the capital Bangui is unsurprisingly bleak.

On Wednesday, rumours circulated that rebels had entered the city, sparking moments of panic.

“Look at how frightened the people are,” said a local trader, who gave his name as Thierry, predicting gloomily: “The elections won’t happen.”

The UN’s human rights office on Wednesday said it was “deeply alarmed” at accounts of escalating violence “stoked by political grievances and hate speech,” and warned of a threat to the right to vote.

But Touadera, the UN, and the EU — including France, CAR’s former coloniser and its staunchest Western ally — all fiercely insist the vote will take place.

Mineral-rich but rated the world’s second-poorest country under the Human Development Index, the CAR has been chronically unstable since independence 60 years ago.

A civil war erupted in March 2013 when mostly Muslim rebels in a coalition called Seleka stormed the capital and removed Bozize, a Christian and former general who had seized power a decade earlier.

Other groups, notably Christians and animists, then organised their own militias, prompting fears of a genocide along sectarian lines.

France sent in some 2,000 soldiers under a UN mandate. In 2014, the UN sent its own mission, MINUSCA, and in 2016 elections were held, won by Touadera, a technocrat educated in France and Cameroon.

Today, the 63-year-old president is considered a shoo-in for a second term after the CAR’s top court barred Bozize, who is on a 2014 wanted list and under UN sanctions, from contesting the elections.

The nearest rival in the 16-strong field is Anicet Georges Dologuele, an economist and former prime minister who is being backed by Bozize after his own bid fell through.

But a crucial question is that of voter participation — a low turnout will badly dent the credibility of the next president and legislature, which is also being elected.

In theory, 1.8 million people are entitled to cast ballots.

But only a third of the country is controlled by the government, which is politically weak and whose armed forces are chronically under-equipped and poorly trained.

The remaining two-thirds are controlled by militias, who derive income from mining and “taxes” on travellers and traders and often fall out over these resources.

“The elections can’t take place on territory controlled by armed groups who want to hamper the vote,” said Roland Marchal, a CAR specialist at the Centre of International Research (CERI) think tank in Paris. He described the situation as an “electoral holdup”.