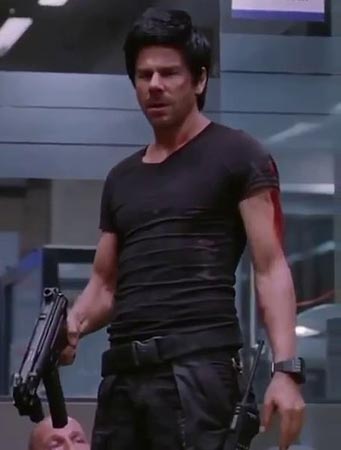 He’s one of Australia’s most successful cricket players, but it seems David Warner could be considering a career in acting.

The sportsman, 34, shared a video to Instagram on Wednesday in which he channelled Bollywood actor Shah Rukh Khan from his film Don 2.

The clip was made using the face-swap app Redface, which superimposed David’s face on to the Indian actor’s.

The Australian opener was shown in a compilation of action scenes from Don 2, and the footage has already gone viral with more than one million views in 24 hours.

David, who regularly shares fan-made Redface videos on his social media accounts, said his followers might not recognise the movie.

‘Sorry about the violence in this but I don’t think you’ll get this one,’ he captioned the clip.

However, his fans had no trouble guessing the film, and many suggested that David consider acting in a Bollywood film.

‘Can we expect a Sharukh-Warner combo?’ one follower commented, while another wrote: ‘I think you should try a Bollywood movie.’

A third added: ‘Hollywood Bollywood Kollywood… all in one, Warner. Soon see you in the big screens.’

He and wife Candice had joined the Boogie Nights star as he trained a group of celebrities at an F45 training session in Woolloomooloo, Sydney.

‘Awesome opportunity meeting this guy this morning! Entourage Australia could definitely work. #fanboy,’ he captioned a photo of the pair on Instagram.