Civil, military leaders pledge to defend nation ‘at all costs’ 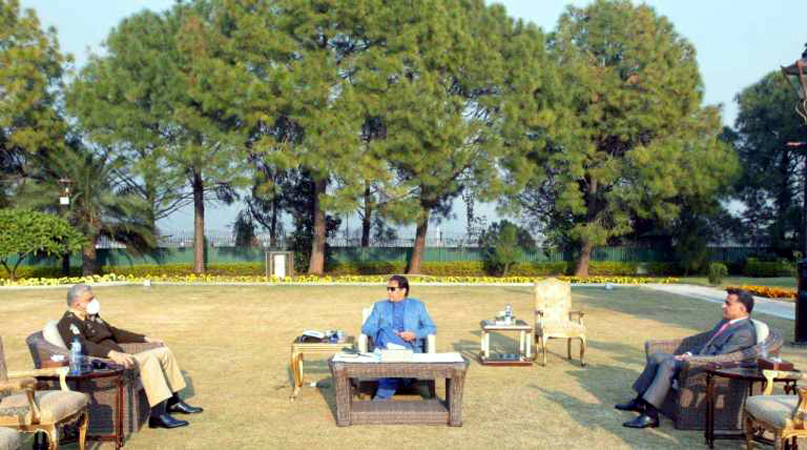 While taking note of ceasefire violations and frequent provocative measures from Indian forces along the Line of Control, the country’s civil and military leadership on Thursday resolved to ensure defence of the motherland ‘at all costs’ with nation’s support.

“It was resolved that defence of the motherland will be ensured with the support of entire nation at all costs,” the statement said. They expressed concern over continuous human rights violation in Indian Illegally Occupied Jammu and Kashmir.

Meanwhile, Pakistan has urged India to eschew use of false propaganda as state policy and must realize that the ploys of spreading misinformation were doomed to fail. “By spreading such falsehoods, India can neither cast a shadow on the international stature of Pakistan nor can divert the attention of the international community from India’s horrendous human rights record,” Foreign Office Spokesperson Zahid Hafeez Chaudhri said at a weekly press briefing.

Referring to the imposition of a fine on Republic Bharat TV by the British media regulator Ofcom for anti-Pakistan hate show by Arnab Goswami, he said it is yet another manifestation of the BJP government’s well-known smear campaign against Pakistan through state-controlled media. He said the Ofcom found the statements in the show to be ‘expressions of hatred’ and ‘intolerance’ towards Pakistani people based on their nationality alone. He said through its state-sponsored media, Indian RSS-BJP regime had constantly tried to masquerade as the victim, rather than the perpetrator of terrorism.

He said the recent dossier shared by Pakistan provided irrefutable evidence of India’s active role in planning, promoting, aiding, abetting, financing and execution of terrorist activities in Pakistan. He said the action taken by Ofcom, along with the report by EU DisinfoLab, corroborated its long-held position about India’s incurable obsession with Pakistan. “We urge the international community to take a serious look into the malicious Indian propaganda that not only aims to defame Pakistan, but also politicizes international forums and imperils peace and security,” the spokesperson said.

Mentioning Foreign Minister Shah Mahmood Qureshi’s official visit to the UAE from December 16-18, 2020, the spokesperson said the visit provided another opportunity for Pakistan and the UAE to reaffirm their commitment towards strengthening bilateral ties, particularly in the areas of trade and investment. He said following the visit, the UAE Foreign Minister Sheikh Abdullah bin Zayed Al Nahyan appreciated the role of the 1.5 million strong Pakistani community and their active contribution for country’s development.

About the situation in Indian Illegally Occupied Jammu and Kashmir (IIOJK), and brutal military siege and inhuman restrictions for 507 days, he said Pakistan strongly condemned unabated Indian state-terrorism and extra-judicial killings of innocent Kashmiris. “I wish to reiterate that in attempts to divert world attention from its internal failings and grave human rights violations in IIOJK, India continues to escalate tensions along the Line of Control.