PML-F’s Durrani meets Shahbaz in jail; advises him to get on ‘track to dialogue’ 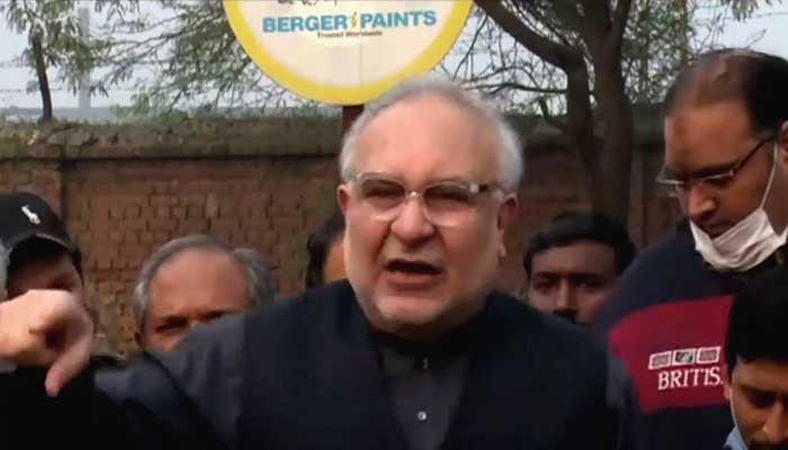 Talking to the media after the meeting, Durrani said that once a series of resignations begins, it will be detrimental for democracy and the country in general.

He was referring to parliamentarians of major opposition parties gearing up to hand in their resignations in an act of protest against the current government.

He said that Shahbaz had been advised to get on the “track to dialogue”, adding that the country must now move towards “back to politics” and “back to the parliament”.

Durrani said that Shahbaz told him he is willing to “go to any extent for the sake of unity in the country”.

He told the media that Shahbaz said he is “sincere” towards the nation, he does not wish to create any divisions and asked what role he could play from within the jail.

The PML-F member said that “fruitful” discussions took place with the PML-N president, noting that Shahbaz, who is the Leader of the Opposition, “wishes to see it stand united and also seeks to unite the country”.

Durrani said that the country’s current situation demands a “grand dialogue” and that supremacy of the Constitution is a fundamental need for Pakistan.

The PML-F leader said that if the government and the Opposition do not wish to hold talks, it further necessitates the need to hold a dialogue. “Track to dialogue is the need of the hour,” he said, adding: “These dialogues do not get exposed, their results do.”

He said that whether it is the government or the Opposition, “the wiser people” among both do wish to hold a dialogue. “Every thinking man knows that a conflict is not in the interest of Pakistan […] we have not come here to antagonise anyone,” Durrani said.

He said the party leadership wishes both the government and the Opposition go to the parliament and hold talks. “In this conflict, not only will the loser have lost, but the winner too will gain nothing.” “We are fully prepared for the track to dialogue,” he added. “Will never propose anything controversial’

Durrani said that Shahbaz and Nawaz Sharif are obliged to stick to their party’s decision, whereas the Opposition as a whole is obliged to stand by the decisions made by the Pakistan Democratic Movement. “I will never propose anything that creates controversy,” he said.

The PML-F leader said that he keeps constant touch with PDM chief Maulana Fazlur Rehman and is also personally in touch with the country’s leadership. Durrani said that the Muslim League leadership should get together and work for the betterment of the country. “What I am speaking of is in the best interests of the establishment, the government and the Opposition,” he said. “Everyone will end up burning in the firestorm that is created due to a head-on collision,” he said.

The PML-F leader said that Shahbaz is Leader of the Opposition and for such a man to be incarcerated closes the doors of dialogue. He added that every politician should conform to their party’s disciplinary policy. “It is my belief that a conflict should not be pursued,” he added.

“Movements cannot be halted by putting people in jail. Members of the Opposition, especially parliamentarians, must be released,” Durrani said, adding that “revenge tactics” will harm any negotiation efforts. He said that now a Charter of Democracy and a Charter of Tolerance must be forged. “The political leadership has to play a role for the bright future of the country,” he stressed, adding that he wishes to see “every process run according to the Constitution”.