The Quaid-i-Azam as a parliamentarian 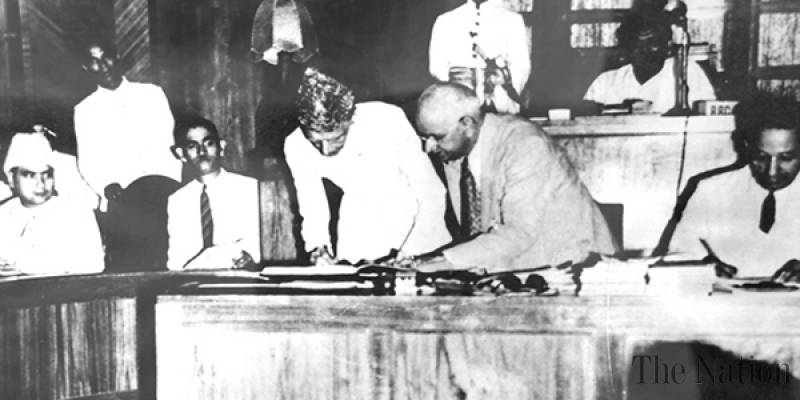 Founder of Pakistan Quaid-i-Azam Mhammad Ali Jinnah, whose another birth anniversary is being celebrated quite enthusiastically on December 25, 2019 by the ever grateful nation ,as a matter of fact had many qualities topped by that of as a lawyer,a parliamentarian and as a public leader. As a public leader, despite odds against him, he had performed the political miracle of 20th century by founding an independent country Pakistan on the world map out of nowhere. In all these top qualities , his mental powers, oratory, determination, honesty and straight forwardness helped him greatly.Here, his achievements mainly as a parliamentarian are being discussed.

Mr. Jinnah was attracted to politics when he was still in London studying law and attended the British Parliament regularly and attentively watched from gallery, the ways, manners, gestures and even the dress of prominent members which formed a lasting impression on his mind.

Mr. Jinnah started his Parliamentary career with his election to the Imperial Legislative Council in 1909. He remained its member till March 28, 1919. But he resigned in protest against what is known as the Rowlatt Act. Mr. Jinnah speaking on the Bill vehemently opposed it as a “new shackle on the freedom of the people.” But despite his protest, the Rowlatt Bill was passed because the government members were in majority.As a protest,he tendered his resignation.

When the Central Legislative Assembly came into being, he was again elected from a Bombay Urban constituency in November 14, 1923. In October 1934 he was re-elected to the Assembly. When Pakistan came into being he was elected as Chairman of the National Assembly – a post that he had held till his death on September 11, 1948.

He always chose his words carefully and never retraced any, once uttered. His critics, whether Judges, Viceroys or Pundits, usually received humiliating tongue lashings for any barely aimed at him. He was not known to sit silent for the slightest reprimand having his razor sharp mind and words on and generally duller weapons of logic or wit drawn against him.

In 1926 the urban constituency selected him to the Indian Legislative Council. He attached himself to the “independent” group and became its leader. At that time the British Parliament had sent Sir John Simon to find out the public opinion in India. Jinnah and other Indian leaders boycotted the Commission ,which did not consist even a single Indian member,with the slogan “Go back Simon”. At Lucknow, and Bombay etc. Simon faced stiff opposition. In fact, Jinnah was never prepared to tolerate even parliamentary action which he thought was unwarranted and wrong.

Several qualities of the Quaid-i-Azam as a parliamentarian are often enumerated as his strategy, keen insight, able advocacy, clear representation, reasoning power, balanced judgement and undaunted criticism. The Quaid was very often witty and sarcastic which distinguished him as a parliamentarian.In view of these qualities the Quaid is generally described as a born parliamentarian and his self-confidence, sincerity, honesty, outspokenness and frankness coupled with his ability and acumen made him ideal in his parliamentary career. The Quaid-i-Azam had a great respect for parliamentary traditions and believed that the speaker of an Assembly should be like an umpire in a game, who must be impartial and fair.

It was the Assembly which on August 12, 1947 had formally conferred on him the title of the Quaid-i-Azam on Mohammad Ali Jinnah.

Mr. Jinnah used his membership of legislature for the benefit of people in general and Muslims in particular. Whenever necessary he also criticised the government but never used unparliamentary language and fully maintained the dignity and decorum of the Parliament, a lesson that subsequent Parliamentarians should have then and even afterwards should have done would well to learn and followed sincerely.

Rapid political changes had taken place after the failure of the Round Table Conference in London in 1930, Mr Jinnah was disappointed with the tactics of the Congress party. When the Indians failed to agree on the future shape of things he was so disappointed that he decided to settle down in England and stay away completely from politics. But in the meanwhile the British Government had promulgated the Government of India Act 1935. Politicians including Liaquat Ali Khan approached him and requested him to come back to India because in a constitutional struggle he alone was suited to lead the Indian Muslims. A strong voice was also that of great philosopher and poet Allama Muhammad Iqbal who despite his poor health still had full trust in Mr Jinnah’s talents who knew the British and the Congress like the palm of his hand. Since it was a constitutional struggle, the fate of the Mussalmans as such could be safely entrusted to him. He came back, took up the leadership of the Muslims League and turned into a mass organisation. It was no more a body of few elites, which met annually, passed a few resolutions and dispersed. The Muslim masses had now joined the organisation. They had conferred the title of Quaid-i-Azam (Great Leader) on Mr. Jinnah, who fully deserved it.

Elections were fought under the Indian Government Act 1935 . The Quaid-i-Azam fully devoted his time to the organising and strengthening the Muslim League. The Parliamentary politics was a part of the main politics and assemblies had become important. The Quaid-i-Azam was a member of the Central Assembly, but was also guiding the League parties in Provincial assemblies. In the Centre the Quaid-i-Azam was the leader of the party and right hand man was Liaquat Ali Khan, who later became the first Prime Minister of Pakistan.

In 1945, crucial elections were held in the sub-continent, in which the youth led by the All India Muslim Students Federation played a key role.The Quaid-i-Azam was as usual chosen to represent the Bombay (Urban) constituency. The Quaid-i-Azam at the time of his election was touring the far away North West Frontier Province. Raja Amir Ahmad Khan of Mahmudabad, as President of the All India Muslim Students Federation was supervising the elections. The Quaid-i-Azam was opposed by an Ismaili Hussain Bhai Lalji who was being backed by the Congress Party. The Congress in a false statement had said that the Aga Khan had asked his community to vote for Hussain Bhai Lalji. But another prominent Ismaili leader Ibrahim Rahimtoola was very close to the Quaid-i-Azam. Fortunately, the Aga Khan happened to be in Delhi at that time.Ibrahim Rahimtoola immediately contacted him on phone. He not only denied having ever instructed the Ismailis to vote for Hussain Bhai but also asked Ibrahim Rahimtoola to intimate all Ismaili families to vote for the Quaid-i-Azam.

League won 100% seats in the Central Assembly and about 70 to 90% in the Provincial Assemblies. This had strengthened the Quaid-i-Azam’s hands and paved the way for Pakistan.

After the partition,the Assembly had the twin capacity of being the Constituent Assembly as well as the National Assembly. The Quaid-i-Azam was elected as its President besides being the Governor General. It was in this Assembly that the Quaid-i-Azam in his address on 11th August 1947 , had laid down the guidelines for the future.In this historic speech the Quaid-i-Azam had indicated that he wanted to see honesty, liberalism, clean life and noble society in Pakistan. It is sad as well as dangerous also that we have forgotten the direction that was prescribed by the Founder of Pakistan. But at the same time it must also be admitted that it was no other forum but the National Parliament at which the guidelines for the future were laid by the Quaid-i-Azam.

The Quaid always kept his audience in mind, which enabled him to assess their mental caliber. When he appeared as a lawyer he knew the judges were usually men of experience and knowledge. He could therefore narrate the complex nuances and fine points of law. In Parliament too most of the members were aware of the problems of socio-political life. But in a public meeting of varied intellects and knowledge sat before him. Many points that he narrated were not easily understandable. So he spoke in a manner on things that were easily understood.

In all fairness, the Quaid-i-Azam did not claim to be a saint or divine preaching to ordinary mortals also did not foist his own views on his followers with dogmatic authority and while speaking in the Parliament with sophisticated audience he was quite different and from parliamentary speaker he rose to the heights of oratory.

As regards his voice and manners, the voice of the Quaid though lacking in volume but was rich in timbre characterized by deep musical resonance, the audience listened to him with bated breath , a motion of a finger, a little waving of the head, or a slight turning of his impressive figure enthralled his audience. The incisive reasoning, the close analysis, the careful marshalling of facts and arguments, the laying of emphasis of points of vantage ,all characteristic qualities of a lawyer , also marked the Quaid-i-Azam’s way of speaking from the public platform as well as the Parliament. He did not try to hoodwink the audience and kept far away from verbal jugglery and mental acrobatics. Mr. Jinnah distinguished himself as a brilliant and astute parliamentarian. In many parliamentary battles, he was the hero of the day. During the first decade of the Legislative Assembly, established under the Government of India Act. 1919 he had crossed swords with many powerful debaters and invariably came out with flying colours. His parliamentary speeches show masterly grasp of the subject under discussion and incisive reasoning whose appeal is irresistible. In the legislature, he had shone as the epitome of the Parliamentary decorum, the grand manner, the elegant style.

For Parliamentary leadership he seemed to be cut out from the beginning and a Parliamentarian he always was and quick perception of legal squabbles and legislative intricacies were ingrained in his blood. The Quaid-i-Azam was a distinguished personality, very neat and clean and head and shoulders above the common run of men. In the home,Parliament and on public platforms he used to wear three–piece suits, and black or white sherwanis. Even in his old age , his behaviour and deportment distinguished him. These were great qualities when he took the floor in the Parliament. Such characteristics are in history and in all fairness , men like the Quaid-i-Azam are just rarer.

The writer is Lahore-based Freelance Journalist, Columnist and retired Deputy Controller (News) Radio Pakistan Islamabad and can be reached at [email protected]