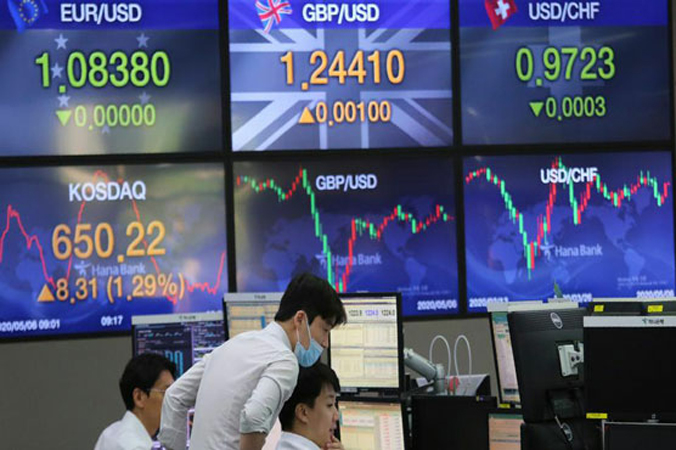 Equities and oil prices have taken a hit recently as virus cases surged across the planet and a new more transmissible strain was reported in the UK, forcing governments to impose tight restrictions and lockdowns to contain the disease over the festive period.

The worrying spike in infections has overshadowed the rollout of vaccines and news at the start of the week that Congress had finally hammered out an economic rescue package worth around $900 billion.

“So much of the good news of the vaccine had been already digested and even the stimulus bill that people had largely anticipated,” Joanne Feeney of Advisors Capital Management said on Bloomberg TV.

“So some of the flattening of the market just reflects how much has already been built into the market from those two good sources of news.”

However, Hong Kong, Tokyo, Shanghai, Sydney, Seoul, Taipei and Jakarta were all in positive territory after recent losses, while Wellington extended gains. Singapore and Manila fell.

The outgoing president slammed the package as not having enough for American families and told Congress to rethink it, raising the possibility it being held up until after Christmas.

“It really is a disgrace,” he said in a video message posted on Twitter. “I am asking Congress to amend this bill and increase the ridiculously low $600 to $2,000, or $4,000 for a couple,” he said, referring to relief cheques being prepared.

“I’m also asking Congress to immediately get rid of the wasteful and unnecessary items from this legislation, and just send me a suitable bill.”

While Asian traders appeared to take the comments in their stride, DailyFX strategist Ilya Spivak warned: “This is yet another catalyst to inspire people to cash out.”

And Axi analyst Stephen Innes warned the first quarter of 2021 could be a struggle for markets.

“Besides the obvious market sentiment shifts on the most worrying virus mutation, some dim-lit economic worries could still hurt the reflation trade” in the first three months of the year, he said.

“Even with the vaccine rollout getting under way, people had become polarised into one of two groups — those ready to travel now and those who are not prepared for six months or more.

“With the new variant of the virus unleashing its wrath on the UK, it is not a stretch to assume that the percentage of those ready to travel anytime soon will drop.”

Worries about the impact of new lockdowns on travel have hit oil prices badly, with both main contracts down more than one percent Wednesday, and around six percent lower since hitting 10-month highs last week.

Investors are keeping a wary eye on post-Brexit trade talks as British and European Union negotiators struggle to find common ground with just over a week to go until a deadline for a deal passes.

The EU has rejected the latest UK offer on the crucial sticking point of fishing but is ready to pursue an agreement even beyond the end of the year cut-off, diplomats said.

According to sources in a meeting of ambassadors, EU negotiator Michel Barnier said he could not guarantee there would be a deal but that the EU’s “door will remain open”, although Britain has rejected the idea of continuing talks into the new year. Still, traders remain hopeful a last-minute deal will be hatched, which was providing a little support for sterling.