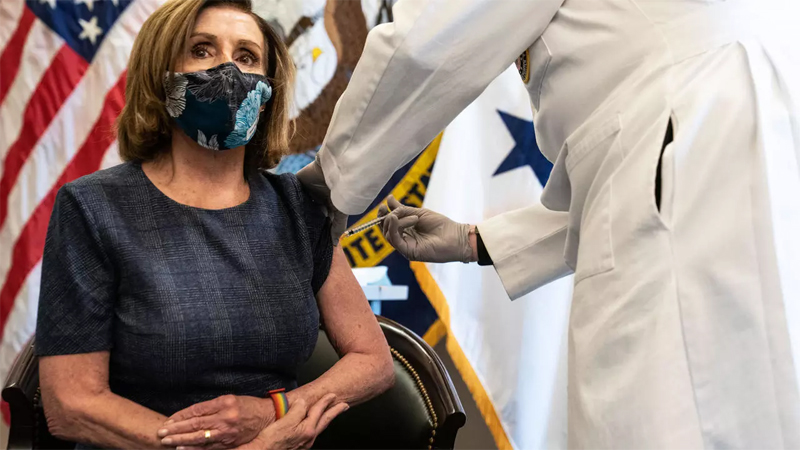 America’s political class are lining up to get the Covid-19 vaccine, taking the shot on television and social media as a way to build confidence among a skeptical public, but also raising the question: should all politicians really be given priority?

Americans have seen White House officials, big names of the Senate and House of Representatives, and state governors get their coronavirus shots — some after spending much of the year disputing whether Covid-19 was even a real healthcare crisis.

The injections delivered to top leadership such as President-elect Joe Biden, Vice President Mike Pence, House Speaker Nancy Pelosi and Senate Majority Leader Mitch McConnell send a message of confidence in the brand-new vaccines. More importantly, keeping them healthy is seen as a national security issue. But some say rank-and-file politicians could step aside for others more needy — over 20 million health care professionals, and millions of elderly in high-risk retirement homes, for example. “Congress has literally done nothing these last eight months,” said New Hampshire Governor Chris Sununu, where Covid-19 cases rocketed in December.

“Now they are cutting the line and getting the vaccine ahead of residents in Long Term Care, nurses, and essential workers who stock our shelves. It’s outrageous. And insulting.”

Together the House and Senate only have 535 voting members, just a small fraction of the millions of vaccine doses being released this month.

The arguments for priority for the most senior politicians are undisputed. Biden, 78, is the next US president. Pence, 61, and then Pelosi, 80, are in line to succeed if President Donald Trump is incapacitated. That’s also why the relatively young next vice president, 56-year-old Kamala Harris, will get her Covid-19 shot next week.

McConnell, 78, meanwhile has to remain healthy to keep Congress running in case of a crisis, and his Senate number two, 87-year-old Republican Chuck Grassley, follows Pelosi in the line of presidential succession.

But for others the argument for moving to the head of the queue is less clear, while the sight of several politicians who have downplayed the pandemic receiving their shots has generated rancor from critics.

Among those lining up for their vaccination in Congress was Republican Senator Joni Ernst, who for months rejected warnings about the severity of the coronavirus and was often seen maskless in political rallies.