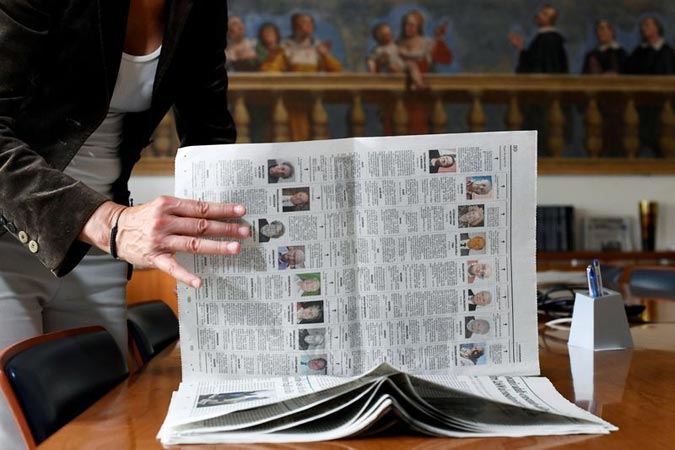 Around 500 relatives of people who died of COVID-19 in Italy said on Wednesday they were initiating legal action against regional and national authorities, seeking 100 million euros ($122 million) in damages.

The civil lawsuit, which the plaintiffs said they would present to a Rome court in the next few hours, is against Prime Minister Giuseppe Conte, Health Minister Roberto Speranza and the governor of the northerly Lombardy region, Attilio Fontana.

The spokespeople of all three politicians did not respond to a request for comment.

Italy, the first Western country hit by the coronavirus, has seen almost 70,000 deaths from COVID-19 since its outbreak emerged in February, the highest toll in Europe and the fifth-highest in the world. The hardest-hit region is Lombardy, where the first COVID-19 patient was detected on Feb. 20.

The lawsuit is being brought by members of a committee called “Noi Denunceremo” (we will go to court), set up in April to represent the relatives of people who died in Bergamo, one of Lombardy’s worst-affected cities.

“This case is our Christmas gift to those who should have done what they were supposed to do, but didn’t,” the group’s president Luca Fusco said in statement.

The committee said when the outbreak erupted in Lombardy local authorities and the central government failed to take rapid action which could have avoided the need for a national lockdown and the economic damage it has brought.

They also decried an alleged lack of preparedness, with neither Rome nor the Lombardy region having an updated plan in place to deal with a possible pandemic.

“The authorities will be asked for an average compensation of 259,000 euros per person for a total outlay of around 100 million euros,” the group’s statement said.

In June, “Noi Denunceremo” asked prosecutors in Bergamo to investigate possible criminal responsibility in the management of the pandemic. Conte was questioned by the prosecutors during the summer as a witness but is not under criminal investigation.