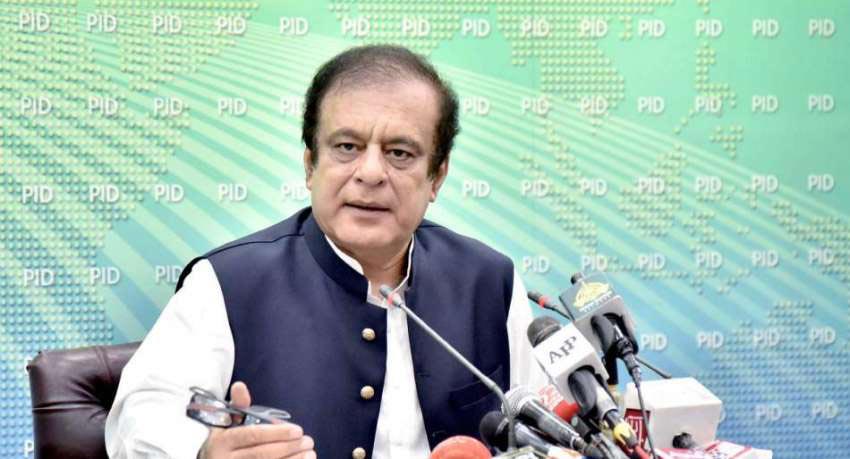 Minister for Information and Broadcasting Senator Shibli Faraz Monday fully exposed the opposition’s tactics of getting an NRO by demanding massive changes in the anti-graft law to make the National Accountability Bureau (NAB) a ‘toothless’ and ‘featherless’ body.

During the meeting of a parliamentary committee meeting that discussed the FATF (Financial Action Task Force) related bill, he said, the opposition had sought 34 out of 38 clauses of the NAB law amended, which would have made the anti-graft watchdog totally irrelevant.

It completely belied the impression being given by the opposition of not seeking any National Reconciliation Ordinance (NRO) like concession from the government, he said while talking to the media.

The minister, who was also part of the parliamentary committee meeting, said all the amendments the opposition had sought in the NAB law, were meant to escape the accountability process, and save their ill-gotten money and assets.

Unlike the opposition’s claims, he said, Prime Minister Imran Khan had the authority to give them any concession, however, he would never give them an NRO. It was evident from the fact that the government would have conceded to their demands while dealing with the FATF-related law, which it did not, he added.

The information minister said the opposition parties already had planned to seek the NRO. The public must know as to how they had used the FATF-related legislation as a ‘negotiation card’ for their personal interests instead of national ones.

He said as the meeting of parliamentary committee went underway to discuss the FATF law, the opposition members left the room. They later joined the meeting with a draft seeking amendments in the NAB law.

He said the first amendment, proposed by the opposition, sought the implementation of NAB law from 1999. It would not only benefit those who had committed corruption before 1999, but also helped them legalize their assets and looted money. Its ultimate beneficiaries would have been those who were involved in the Chaudhry Sugar Mills case.

He said the second amendment suggested to restrict NAB from investigating the cases involving less than Rs one billion corruption. Its beneficiaries would have been Pakistan Muslim League-Nawaz leaders Khawaja Asif, Javed Latif and Rana Sanaullah, and the accused of Ramzan Sugar Mill case.

The third amendment, Shibli Faraz said, pertained to removal of money laundering from the crimes list, which would have benefited PML-N President Shehbaz Sharif, who was an accused in the telegraphic transfer scam, Pakistan Peoples Party leader Asif Ali Zardari and his sister Faryal Talpur in fake bank accounts and other cases, and Khawaja Asif in the assets case.

Through the fourth amendment, he said, exclusion of spouses and children from the definition of Benamidar was proposed, and its beneficiaries would have been Asif Zardari, Anwar Majeed, Iqbal Memon, Maryam Nawaz and Maulana Fazl ur Rehman.

The minister said the fifth amendment sought to remove the powers of NAB to take up the cases related to willful default and loans write-off. It was supposed to benefit Asif Zardari and company, and the sugar mafia working under Suleman Shehbaz.

Shibli Faraz said through another amendment, the opposition proposed that the disqualification of a politician should be linked with the apex court’s order, with its duration reduced from ten to five years.

The minister said the amendment suggested in clause 10 of the NAB law was meant to prevent international cooperation against money laundering. It was in fact aimed at throwing the AMLA (Anti-Money Laundering Act) into a dustbin as it would help the opposition leaders to protect their ill-gotten money laundered abroad through illegal channels, he added.

He said the opposition had also suggested to abolish the whistle blower law, which was enacted to curb the corruption in the country.

As regards the Pakistan Democratic Movement (PDM) rallies, Shibli Faraz said after the FATF-related legislation, the 11-party alliance got convinced that the prime minister would never give them an NRO and they all of a sudden started making a noise about alleged rigging in the last general election.

The entire nation, however, had rejected the narrative of so-called ‘champions of democracy’, who were now on the roads to protect their personal interests while putting the lives of people at risk, he added.

Terming the PDM leaders ‘a gang of the corrupt’, Shibli said they were making all-out efforts to derail the government as they were convinced that they would never get any relief from the prime minister.

He said with the coronavirus infection rate intensifying, more people were losing their lives and hospitals were getting overburdened. In such a situation, the PDM parties should exercise restraint instead of holding political gatherings despite the government’s clear instructions and the court’s order in that regard as their ‘uncalled action’ would further spread the deadly virus.

The PDM was planning to stage another ‘fair’ at Larkana, where they would certainly face the same public humiliation as they suffered in their previous public gatherings, he added.

Pointing out the insensitive attitude of the opposition, Shibli said they had put everything at stake for their ‘political future’. They did not care about law and even the people’s lives, he added.

To a query, he said Maulana Fazl, under the religious cloak, was misleading the people and doing dirty politics by launching verbal onslaught on the national institutions.

He said the opposition leaders only believed in a system, which treated the rich and the poor differently. They only accepted those court decisions that came in their favour, he added.

The opposition parties during their governments had ruined the state institutions and made them dysfunctional, he added.

Shibli Faraz said despite the coronavirus pandemic that had devoured the global economies, the country’s economy was on upward trajectory as its major indicators were reported positive that included record increase in exports and remittances. The economic revival amid the Covid-19 was made possible due to proactive strategies of Prime Minister Imran Khan.

Other initiatives, including creation of two big cities, were also underway that would eventually create job opportunities in the country, he added.