In east Jerusalem, a battle over ‘every inch’ of land 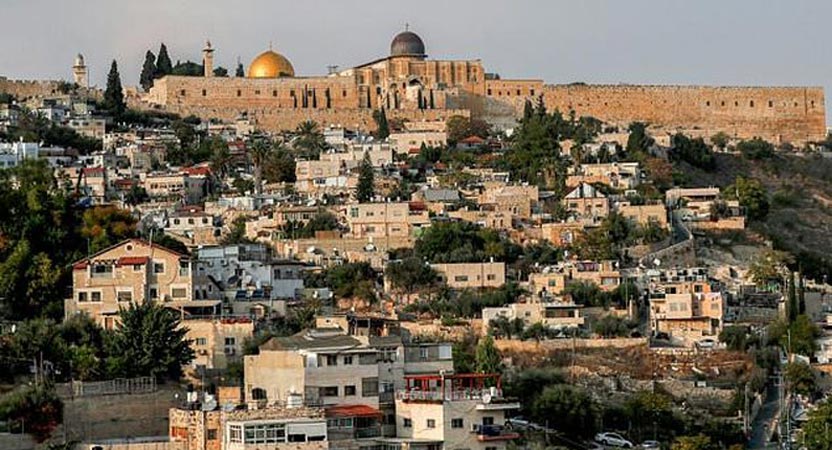 The television in Zuheir Rajabi’s lounge does not show films or the news: the only footage projected on its huge flat screen is from 10 surveillance cameras installed around his modest east Jerusalem home.

Rajabi lives in Silwan, a poor neighbourhood just outside the Old City in Israeli-annexed east Jerusalem, made up of dusty trash-strewn alleys, with electrical cables dangling low off their poles.

The moustached 49-year-old Palestinian told AFP that the surveillance footage offers him a sense of protection in case Jewish settlers harass him or clashes with Israeli police erupt again outside his door.

“This piece of paper proves my father bought this land from a Palestinian in 1966,” Rajabi said, waving an Arabic document from the Jordanian authorities who controlled east Jerusalem until 1967, when Israel seized it in the Six Day War.

“But the Israeli courts don’t want to hear about it,” the father of four said with a grunt, seated in his living room with its orange and grey walls. Rajabi has been locked in a five-year legal battle with three Israelis — Yitzhak Ralbag, Avraham Sheferman and Mordechai Zarbiv — who represent a trust registered in the name of Rabbi Moshe Benvenisti that claims ownership of the land where his home sits. The Benvenisti trustees have cited 19th-century documents from the Ottoman Empire, which controlled Jerusalem before the British mandate era began in 1920, showing that Silwan land was owned by the trust. The trust rented plots to Yemeni Jews, who lived in the area until they were forced out by Arab riots in 1929 and 1936.

In 1970, Israel passed a law allowing Jews to reclaim property they had lost in or before 1948, the year of Israel’s creation which also saw authority over east Jerusalem pass from British to Jordanian control.

In cases where former east Jerusalem Jewish landowners or their heirs were unavailable, Israel granted administration of the land rights to a government entity called the General Custodian.

In 2001, the General Custodian declared the Benvenisti trust the rightful owner of two plots in Silwan, including one that Rajabi calls home.

Rajabi, who heads the local branch of a Palestinian community organisation that runs recreational activities, is due to face Ralbag, Sheferman and Zarbiv in court again on December 22. As with most homes in Silwan, the Al-Aqsa Mosque and the southern Old City Wall can be seen from Rajabi’s house, which has been extended over the years from its original two rooms. He claims he has been offered a substantial cash payout to leave the property, where he has lived since the late 1960s. He also told AFP that the Israeli state had “offered to build us a home in other areas of east Jerusalem, and we refused”.

Rajabi’s case is not unique in the Silwan neighbourhood. Like all of east Jerusalem, it is considered occupied Palestinian territory by much of the international community. Israel’s annexation of east Jerusalem has not been recognised by most nations.

In the 1980s, settlers began moving into Silwan, which sits on land where — according to Jewish tradition — King David established his capital some 3,000 years ago, making the area hallowed ground in Jewish history.

There are now several hundred settlers in Silwan, living among some 50,000 Palestinians.

The area’s Jewish homes are recognisable by Israeli flags flying on their roofs and modern facilities like a fully-enclosed basketball court that poorer Palestinian residents would struggle to afford.

Although not all cases are documented, anti-occupation group Peace Now says that 700 Palestinians in east Jerusalem are threatened with eviction. Settler expansion in the area does not appear to be simply the result of individual families seeking to live in what Jews call the City of David. Critics of Silwan’s settler movement allege that it is backed by a spectacularly well-funded campaign aimed at transferring Palestinian-owned land to Jews.

A thick binder planted on Rajabi’s dining room table documents an Israeli legal process he blasts as biased against Palestinians.

“It’s a political issue and all the branches of the Israeli government are conspiring together,” he said.

A 1992 report by Israel’s then Labour-led coalition government found that collaboration between the General Custodian and groups like Ateret Cohanim was plagued by “conflicts of interest.” The report made recommendations to address those conflicts, which activists say have been ignored. Ateret Cohanim rejects any suggestion that it is working to force out Palestinians. The group is simply focused on one particular type of transaction, its head Daniel Luria told AFP. “We’re doing ideological real estate. We’re not forcing anyone to sell, we’re not doing door knocking (but) if an Arab wants to sell, we’re not going to say we’re not interested,” Luria said.

It is taboo among Palestinians to sell to settlers.

But the head of Peace Now, Hagit Ofran, said that for Palestinians in east Jerusalem “it is very, very hard to compete with the endless budget of groups like Ateret Cohanim” or the hardline settler organisation Elad.

Pro-settler groups are ready to give “millions for a small piece of land”, nearly impossible sums for Palestinians to pay, she told AFP.

According to a September investigation by the BBC, Russian oligarch and Chelsea football club owner Roman Abramovich controls companies that have donated an estimated $100 million to Elad.

Abramovich — who was granted Israeli citizenship in 2018 — has not publicly discussed his reported contributions and Elad declined to comment on its donors. While the Palestinians are financially overmatched, they are not fighting alone. Turkey’s international development agency (TIKA) has, according to its website, “restored numerous local homes and shops in an effort to ease the hardships faced by east Jerusalem’s Muslim community as a result of Israel’s ongoing policy of Judaization.”

Contacted by AFP, TIKA declined to provide details about its east Jerusalem activities, but Ankara has become an active global player on behalf of the Palestinians.

Battle for ‘every inch’

Abdelhalim Shaloudi received an eviction order at his 70-square-metre (750-square-foot) Silwan home in 2003.

“I don’t sleep at night any more,” the father of four told AFP. Shaloudi said the lawyers recommended by the Palestinian Authority — based in Ramallah in the occupied West Bank — cannot match the high-priced settler legal effort in Israeli courts. But for now, he has no option but to wait it out and hope.