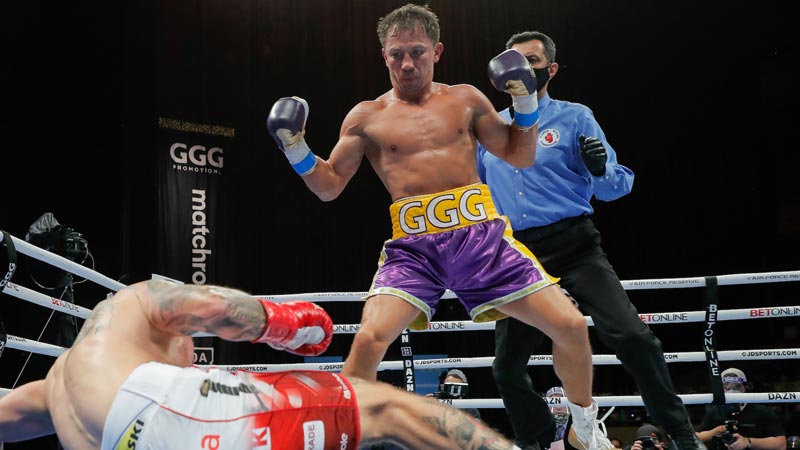 MIAMI: Gennady Golovkin made boxing history on Friday night by knocking down Kamil Szeremeta 4 times en route to a 7th round TKO over the overmatched Polish challenger to retain his IBF world middleweight title. The 38-year-old Golovkin floored the soft-punching Szeremeta in the 1st, 2nd, 4th and 7th rounds in a one-sided fight to surpass Bernard Hopkins for the most ever defenses at 160 pounds with 21. “It was a lot of fun,” said Golovkin of Kazakhstan. “I come back. I told you I would come back after Canelo (Alvarez) fight. I felt very comfortable because I worked hard. I had a lot of time to prepare and I am very proud of my team.” Szeremeta survived the 7th round but the referee stopped the fight between rounds in the closed-door contest at the Seminole Hard Rock Hotel and Casino in Hollywood, Florida.

The previously unbeaten Szeremeta, 31, was completely outclassed from the opening bell, getting knocked down the first time at the end of the opening round when Golovkin nailed him with a left hook. Golovkin (41-1-1, 36 knockouts) floored him again late in the 2nd round with an overhand right to the ear, and in the 4th with an uppercut to the chin. The constant battering left Szeremeta (21-1, 5 knockouts) pawing at Golovkin after the 4th round. There was no snap on his punches as it became alarmingly obvious he had never faced anyone the caliber of Golovkin before. The final brutal knockdown came halfway through the 7th when Golovkin dropped the Pole with a Bruce Lee-style short jab that sent Szeremeta stumbling backwards across the ring. Golovkin was way ahead on the judges’ scorecard as he won 3 of the first 4 rounds by a 10-8 scores.

Friday’s impressive win rekindles the possibility of a third fight between Golovkin and Saul ‘Canelo’ Alvarez, who defeated Golovkin with a controversial majority decision in Las Vegas in 2018. “I am absolutely open to fight anybody,” Golovkin said. “Whatever is the best opportunity for me, for business. “We will wait for tomorrow to see who wins. I hope it is a great fight, but I am open for anyone.” The win also silences critics who claim Golovkin was in decline after an unimpressive unanimous decision victory over Sergiy Derevyanchenko in his most recent fight in October 2019.