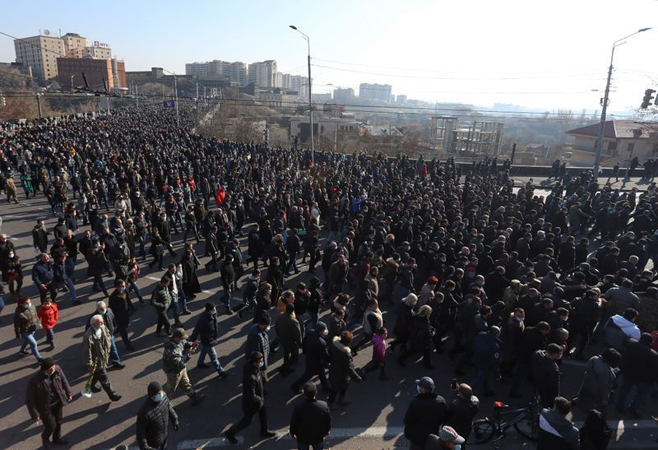 Thousands of Armenians marched through the capital Yerevan on Saturday to commemorate the soldiers killed in a six-week conflict over the Nagorno-Karabakh region in which Azerbaijan made significant territorial gains.

The conflict and the fatalities on the Armenian side have increased pressure on Prime Minister Nikol Pashinyan, whom the opposition accuses of mishandling the conflict by accepting a Russian-brokered ceasefire last month, to resign.

Pashinyan led the march, held on the first of three days of mourning, driving up to the Yerablur military cemetery to light incense on the graves of fallen soldiers along with other senior officials.

Although his supporters filled the cemetery to its brink, footage published on Armenian television showed Pashinyan’s critics shouting “Nikol is a traitor!” as his convoy passed by, escorted by heavy security.

Armenia’s opposition has called on its supporters to join a national strike on Dec. 22, at the end of the three-day mourning period, to pressure Pashinyan to resign over the losses incurred in the conflict over Nagorno-Karabkh.

Pashinyan, who swept to power in a peaceful revolution in May 2018, has rejected calls to resign.

Ethnic Armenian authorities in Nagorno-Karabakh accused Azeri forces on Wednesday of capturing several dozen of their troops, putting further strain on a ceasefire deal that brought an end to the fighting last month.