PM dares opp to resign ‘as quickly as possible’ 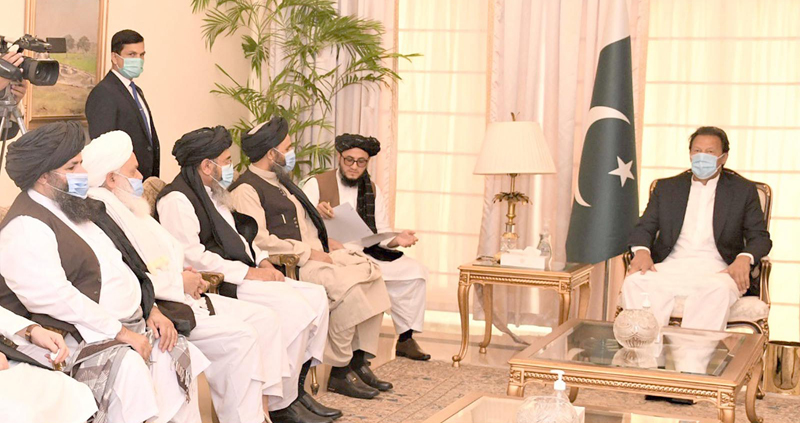 Prime Minister Imran Khan on Friday while daring the opposition parties on immediate resignations, predicted that majority of their members of National and provincial assemblies would not tender resignations.

“I invite them to resign today instead of tomorrow. I am predicting that majority of them [members of assemblies] will not resign,” Imran Khan said in an interview with a private television channel (Samaa News).

The prime minister further said he was waiting rather praying for their resignations. “If they resign, it will be better for Pakistan,” he remarked.

Imran Khan said the Pakistan Democratic Movement (PDM) could do whatever it wanted, as the government was ready for everything.

“Whatever they do, they will make their own loss like they did at the Minar-e-Pakistan,” he remarked. The prime minister described the PDM’s December 13 public meeting a “flop show” and said the people of Lahore did not come out and most of the participants comprised students of religious seminaries or those attracted by the offers of ‘Naan and Biryani’. “They were claiming to gather a sea of people at the Minar-e-Pakistan,” Imran Khan remarked and offered to facilitate the PDM in their planned sit-in in Islamabad. “But they will not be able to achieve their objective,” he added.

The prime minister also dared the PDM to stage even a week-long sit-in the Federal Capital, saying after holding a 126 days sit-in in Islamabad he had become a “Dharna Specialist”.

“If they sustain even a week-long sit-in, he will start thinking of resignation,” he said in response to a question. About the Senate elections, the prime minister said the polls could be held 30 days prior to the expiry of tenure of the present members.

As far as the procedure of open ballot or show of hands was concerned, he said, the government would approach the Supreme Court for interpretation of the relevant clauses of law.

He said as it was a well known fact that the people indulged in corruption through use of money in the Senate elections, the government’s intention was to check such malpractices in election of Upper House of Parliament. “If a member of Senate is elected through corruption, how and what he will contribute in the legislation process?” he remarked. To a question, the prime minister categorically rejected the reports of his cabinet member’s visit to Tel Aviv as “totally incorrect” and “fake news” and said it was part of India’s disinformation campaign recently exposed by EU DisinfoLab. “It is totally incorrect. When we have a policy that we will not recognize Israel, why a minister will go there? And what he will do there? It is fake news,” he added. The prime minister said a full-fledged campaign was being run and the European Union DisinfoLab had recently exposed the whole Indian network. Some Pakistani nationals were also involved in the network [of disinformation] and were feeding them from here, he added. “Uproar is going on in the country [by the opposition parties] for the last two years.., the voices of all is bad,” the prime minister remarked and questioned “Did no good thing happened [during this period?”

He lamented that nobody [from the opposition side] was telling that the country’s economy had come on a takeoff position.

“If the stock exchange is moving upward, it shows the confidence of investors and businessmen,” he said and again questioned, “Can anybody take the stock market up by force?” Prime Minister Imran Khan went on to say that there is “a lot of anger” within the army over the verbal attacks of PML-N supremo Nawaz Sharif and his party against the top military leadership. Former prime minister Nawaz, in his speeches in the anti-government rallies of Pakistan Democratic Movement (PDM) alliance, has alleged that Chief of Army Staff Gen Bajwa and ISI head Lt Gen Faiz Hameed orchestrated his ouster in 2017 and rigged the 2018 general elections. “I praise Gen Bajwa today. To attack an army chief in this manner; a reaction comes from the army,” Prime Minister Imran said, when asked whether there was any “anger” within the military over Nawaz’s aggressive speeches.

“[But] Gen Bajwa is an uncomplicated man. There is composure in him, that is why he is tolerating this. There would be a big reaction if somebody else was leading the army,” the premier added.

He said although there was “a lot of anger” within the army ranks, “I know he is tolerating this because he believes in democracy.”