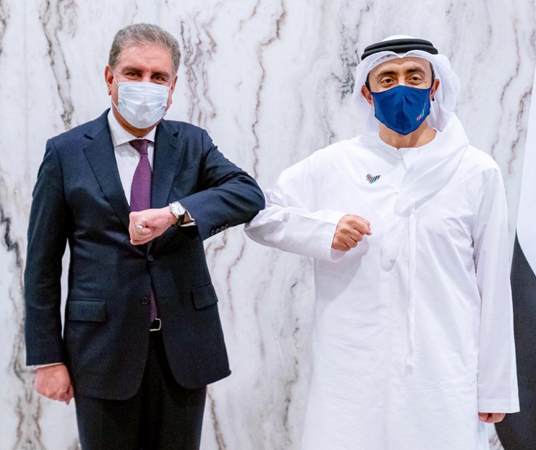 Foreign Minister Shah Mahmood Qureshi on Friday said India is planning to undertake a surgical strike against Pakistan to divert the attention of world from its worsening domestic situation.

Addressing a press conference in Abu Dhabi, the foreign minister said India’s irrational approach was driven by its frustration emanating from internal unrest due to the RSS-BJP regime’s policies aimed at subjugation of religious minorities and disadvantaged segment of the society. “India is planning a false flag operation … we are well aware about Indian designs. We have intelligence report about false flag operation by India,” he said.

He said India was looking to divert focus from its internal issues since the human rights situation in the Indian Illegally Occupied Jammu and Kashmir (IIOJK) was worst. “I want to share all this information with the UAE government and rest of the world,” Qureshi said, adding that the situation in Indian Illegally Occupied Jammu and Kashmir has further deteriorated due to India’s oppression of Kashmiri people. He also mentioned the countrywide protest of Indian farmers and mishandling of coronavirus pandemic, that led to agitation of citizens against the incumbent BJP government.

Qureshi mentioned that Pakistan had exposed the nefarious designs of India to create instability and presented before the world the credible evidence in this regard. He said the Indian Chronicles report by EU DisInfo Lab was a proof that India was misusing the platforms of international bodies such as United Nations and European Union. He said Pakistan is a peaceful country, however was firm to give a befitting response in case India made attempt of any military misadventure. He urged upon the world to take notice of India, which he said, was playing a dangerous game of targeting peace in the region. The foreign minister said he held a wide-ranging meeting with his Emirati counterpart and discussed issues of bilateral importance. He said Pakistan and UAE enjoyed close brotherly relations and stood by each other in difficult times.

Earlier in Dubai, the Foreign Minister visited Pakistani Consulate, where he was received by Consul General Ahmed Amjad Ali and senior officials. The foreign minister was briefed that Dubai Consulate repatriated 58,500 Pakistanis stranded during the coronavirus pandemic. Also, the Dubai Consulate distributed 17,500 ration bags and made arrangements for sending 359 bodies to Pakistan.

The foreign minister commended the consul general and his staff for taking special care of the Pakistani community in Dubai, despite limited resources, in the wake of the global pandemic. He directed the consul general to use economic diplomacy to acquaint the effective investors of Dubai with the best investment opportunities available in Pakistan.