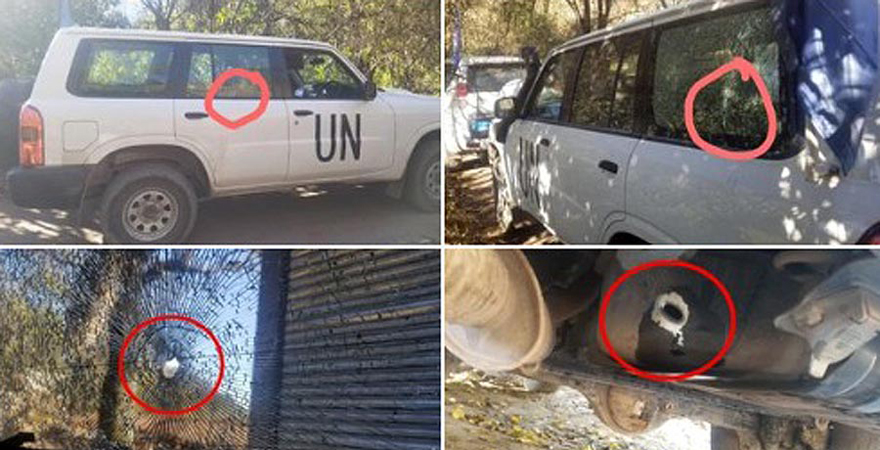 Indian army resorted to unprovoked fire in Chirikot Sector at LoC and deliberately targeted a United Nations vehicle with two military observers on board who were enroute to interact with CFV victims in Polas Village.

“It must be noted that the UN vehicles are clearly recognisable even from long distances due to their distinct make and type and clearly visible markings,” DG ISPR said in a tweet. He said while the vehicle was damaged, the two UNMOs luckily remained unharmed. They were safely rescued and evacuated by Pakistan Army to Rawalakot. Such illegal and unlawful acts against all established international norms signify ill intent of Indian army to target not only innocent civilians residing along the Line of Control but UN peacekeepers as well. This act only goes to show Indian army’s complete disregard to principles enshrined in UN Charter. It is indeed a new low for Indian Army. Pakistan Army stands in solidarity with UNMOGIP officials and appreciates the selfless services rendered by all members of UNMOGIP in discharge of their UN mandated duties.

The officers were on their way to Polas village to meet with the victims of the Indian Ceasefire Violations. The UN vehicle was damaged, however the officers remained safe. The spokesperson said the officers were immediately evacuated by Pakistan Army and brought back to the UNMOGIP field station in Rawalakot. “The reprehensible act of unprovoked firing by India on the UNMOGIP officers is indicative of a new low in the conduct of Indian occupation troops,” he said.

He said this year alone, India had committed 2,992 ceasefire violations to date, resulting in 27 martyrdoms and serious injuries to 249 innocent civilians, including 92 women and 68 children. He said Pakistan called upon India to respect the 2003 Ceasefire Understanding, investigate such incidents of deliberate ceasefire violations and maintain peace along the LoC and the Working Boundary (WB). “Pakistan also urges India to allow the United Nations Military Observer Group in India and Pakistan (UNMOGIP), to play its mandated role as per the United Nations Security Council (UNSC) Resolutions,” he said.

The spokesperson said Pakistan had information from credible sources that India was planning to undertake a military misadventure or so-called surgical strike across the LoC and international border, for which it was trying to seek understanding from major powers. He said a series of events and developments had exposed the real face of India to the world community. He recalled that the recently released dossier by Pakistan had left no doubt about Indian state-sponsorship of terrorism. He said Pakistan’s armed forces were fully prepared to defeat Indian designs. “Any miscalculation will result in global embarrassment for India, as it faced in 2019,” he warned. He said any ill-considered misadventure by India would face an “assured notch-up military response from Pakistan”. He said such a scenario would, however, seriously destabilize the region with catastrophic consequences, the fact also been shared with important world capitals.