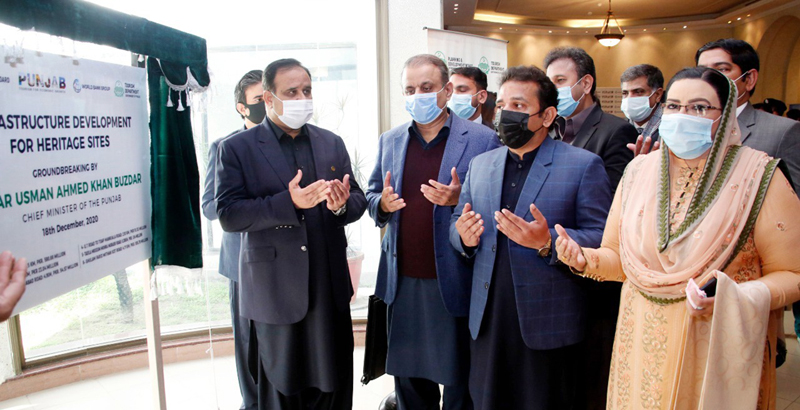 Chief Minister Punjab Sardar Usman Buzdar laid the foundation stone of roads infrastructure improvement plan of six tourist-spots under tourism for economic growth project at 90-SQA on Friday. The project has been launched in collaboration with the P&D Department and the World Bank.

Addressing the ceremony, the CM said roads infrastructure will be improved with a cost of Rs83 crore adding that revamping of the 35-kilometre long roads will be completed in the first phase. Tourism zone is being developed in the salt range consisting of Chakwal, Khushab and Mianwali and new tourist-spots are going to be introduced in Kotli Sattian, Chakwal, Jhelum, Soan Valley, Mianwali, Attock, Fort Munro and Koh-e-Suleman. Along with it, the CM said that steps will also be taken to promote tourism in Jhelum, Multan, Bahawalpur and other areas. More projects will also be started to further promote tourism because a large potential of historic, cultural and religious tourism is available in Punjab, he said. Meanwhile, the CM told that a program is underway to restore Lahore Fort and other historic spots with an amount of four billion rupees. Tourist- spots will also be developed under a public-private partnership, he disclosed.

The CM said a total of 176 rest houses have been opened to the general public through an online booking facility. The Punjab government has formulated tourism policy and a tourism authority has also been set up to promote tourism while software has been designed for online issuance and renewal of licenses of stakeholders. He announced to project Chakwal as a lake city as a number of natural lakes are available in this historic district. Similarly, resorts are being established at various rivers and lakes to provide recreational facilities to the visitors. Such a resort facility is under construction at Taunsa Barrage to offer water sports activities, he added. The CM stated that double-decker tourist bus service is started in Rawalpindi and the facility will be extended to Bahawalpur, DG Khan and Multan soon.

The CM maintained that a lot of tourism-related potentials is available and Punjab will be projected as the hub of tourism. The soft image of Pakistan can be projected worldwide through tourism and it will also attract investors, he added. The CM assured to provide ample funds for the projection of tourism adding that cultural activities will also be promoted alongside, he added.

Special Assistant to PM Syed Zulfiqar Bukhari, in his video link address to the ceremony, said that Pakistan has tremendous tourism-related opportunities and these facilities are being fully exploited. Tourism and economy go hand in hand and the national economy will be strengthened due to the promotion of tourism, he added. Country Director World Bank Mr Najy Benhassine, in his video link address, assured that the World Bank will continue its collaboration with the Punjab government for the promotion of tourism. Tourism Advisor Asif Mehmood assured that no stone will be left unturned to develop Punjab as a tourism-hub adding that practical steps have been taken in this regard. Chairman P&D Hamid Yaqoob apprised the participants about salient features of Punjab tourism for economic growth project. Secretary C&W briefed about the salient features of the project and CM also inspected stalls of the tourism and P&D departments.

Federal Minister for Religious Affairs Pir Noor-ul-Haq Qadri called on Chief Minister Punjab Sardar Usman Buzdar at his office and discussed matters of mutual interest. Talking on the occasion, the CM said Pakistan is passing through a sensitive phase of its history and the motherland demands unity. Those who were trying to divide the nation should look into their own peep, he added. The CM emphasized that the government will foil the nefarious conspiracy of dividing the nation as people have already rejected those who give preference to their personal interest. The foundation of a new Pakistan has been laid and there is a need to promote the passions of brotherhood, tolerance and harmony in the society, he added.

Chief Minister Punjab Sardar Usman Buzdar congratulated the newly elected office-bearers of Lahore Education Reporters Association. In his message of felicitation, the CM hoped that the new LERA body will play its active role to highlight the steps taken for the promotion of education in the province.