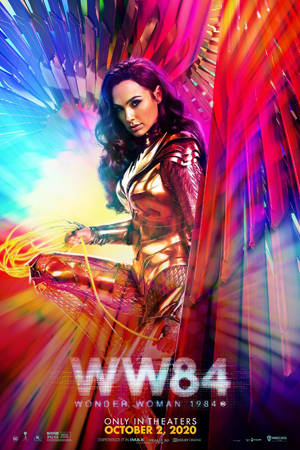 The opening scene of Patty Jenkins’s ‘Wonder Woman 1984′ is a lesson: shortcuts to greatness, cheating at the expense of others, will get you nowhere. It’s all a lose-lose. Which is a solid enough lesson for Diana Prince – a child, in this moment, still living on the women-run archipelago of Themyscira – to learn before she becomes Our Goddess and Savior Wonder Woman. But look at the way she learns it. She gets a little cocky during a competition, gets knocked off her horse, and finds a clever way to get back into the game. You might expect the prevailing lesson to be one extolling the values of quick thinking and using your wits. Instead, she’s reprimanded: Get ahead using the straight path – the right path, the harder path – or, morally, you’ll always be behind. The evil that eventually crops up in WW84 makes the value of this lesson a bit clearer … when applied to other people. But what’s the hard road for a demigod, really? The odds are always in their favour. Make them humane, sure, otherwise the rest of us are toast. But why rein in their creativity, their wit?

In fact: Why rein Wonder Woman in at all? Wonder Woman 1984 is, in so many ways, a more ambitious, expansive movie than its predecessor, tackling more in the way of dramatic chaos, big feelings, and convoluted archaeological villainy. But Diana Prince herself, as resumed by Gal Gadot, feels a little less complicated, her personality even more razor-focused, more straightforwardly virtuous, than before. It makes all the excitement that arises in the movie’s button-busting two-and-half-hour runtime feel somehow narrow, too, even as the premise expands. A cursed ancient object, a megalomanic named Maxwell Lord, an insecure and oft-harassed geologist, Barbara Minerva, a blast from the past … these are how the movie expands. And in the same moments, Diana herself seems to contract.

Let’s skip the plot specifics for now. Wonder Woman 1984 is a better made and more interesting movie than its predecessor, in the way that a superhero sequel ought to be: Now that we’ve gotten the origin out of the way, let’s get to business. You know the climactic fight is coming; you know there will be other fights along the way to keep the audience’s asses glued in place. Jenkins’ Wonder Woman movies feel more interested in the little grace notes of Diana’s personality. The trouble with the new movie is that it suffers for having fewer of them, or rather, few new ones. The action in these movies has clear appeal. But Jenkins’ interest in Wonder Woman the woman has always felt more essential. The fights, for example, are less memorable for the particulars of combat than for Gadot’s truly enviable ability to live up to the heightened iconography, the hear me roar ethos of it all. Looking good during a fight: It’s the kind of thing only a star can do, really. We will probably always associate this franchise with that slow-motion battle charge through the wreckage of world war, which gets a callback in the latest movie. The image works well enough that even the hideously goofy, but still somehow catchy, theme music can’t totally dull the awe.

It’s the solid, goofy action-movie stuff that makes the superheroism of these movies good, when it’s good. Even the burden of representation can’t weigh that stuff down. It all gives off the impression that this is a woman who knows that all eyes are on her, that these battles aren’t just plot points or excuses to blow things up or beat guys up, but rather a chance to flex Gadot’s genuine star quality. That all kind of collapsed in the muddle of the first movie’s climax. But nothing in that movie’s hellish Third Act fight is as memorable as Diana eating ice cream for the first time, or seeing a man for the first time. The sequel has less of that, for better or worse. The story’s already gotten most of that out of the way – romantic subplot, which I won’t spoil, notwithstanding. If anything, WW84 stands out for how slow everyone is to realize the true nature of the villain they’re facing – that is, the double-edged promise of the monkey’s paw at the movie’s centre. It’s a meatier movie, in that way. There’s more to grab hold of, worthwhile and not.

The Wonder Woman envisioned by Jenkins and Gadot is, of course, intent on saving the world, but – contra the godly Superman, who in recent iterations would need to be as strong as he is to keep propping up that hefty chip on his shoulder – she doesn’t seem all so hung up on it. Being in love with a dead hero-pilot does that to you. Diana Prince, not Clark Kent, is the “actual” demigod among us. But the fun irony of the first movie was that she wasn’t any less alien than he is, being, in part, that she’s an immortal who grew up in a place where women rule the world. The first Wonder Woman played this up as humorous naiveté. The Diana of the sequel, meanwhile, brushes off an overly flirtatious co-worker with the brusque efficiency of a woman who’s not doing this for the first time. She’s seen a few things over the years – just not her beloved Steve.

A movie set in the 1980s, at this stage of the nostalgic-content game, would tend to overcommit to the bit, mostly for the audience’s sake: retro costume shenanigans, conspicuous needle drops, grab-bag references to Spielberg and other pop-culture royals of the era, all of them feel-good allusions that make us feel all the better for basking in our collective love of Gen X’s taste in pop. Wonder Woman 1984 doesn’t skimp on the costume fun; the expected gags, to that effect, sneak their way into the movie.

But the more-intensive connection to the era that we get in WW84 is, to at least my surprise, world-political. The thinkpieces to come will undoubtedly tell us how political – and how to feel about it. The movie’s villain is an oil man, or rather, that’s what he desperately wants to be. The Eighties were the era of the “oil glut,” as an exclamatory New York Times article once put it. Which means that our man Maxwell Lord is trying to make it as an oil man at a time everyone already has. Also, he doesn’t seem especially good at it. He’s a television personality with a man-baby pathetic streak and a snake-oil-salesman unctuousness – so someone’s going to compare him to Trump. That specific connection, which is only so compelling, matters less than the overall strangeness of the film’s detour to the Middle East, and some of the battles and troubled histories it evokes while there. This, among other things, makes WW84 a weird movie, even if you think it’s a good one – and only, probably, when you stop to actually think about it.

Obviously we’re not meant to stop and think; it all keeps hurdling forward. If the characters have any particular feeling about the conflicts stirred up in Cairo or any of the mess that comes with it, they don’t say so. The real-world shit it dredges up in this regard is … not mere backdrop, but of such little real consequence to the characters involved that it’s fair to wonder why the movie even bothered. A claim to ancestral land has been made; a gauntlet has been thrown. Can’t we at least talk about it? No? OK, then. What matters most is the nuclear war it all eventually beckons forth. Nukes are universal: We can all relate to them scaring us shitless. The rest – the heaping pile of troubling specifics – is noise.