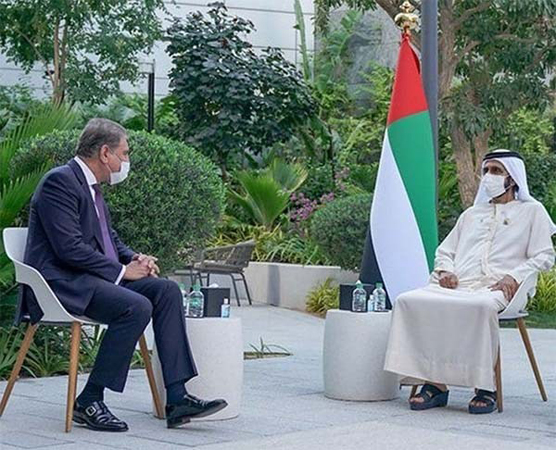 The foreign minister conveyed warm regards of Prime Minister Imran Khan to Sheikh Mohammed bin Rashid, who is also the Ruler of Dubai. The prime minister of the UAE warmly reciprocated the sentiments, Foreign Office said in a press statement issued here.

Foreign Minister Qureshi exchanged views with the prime minister of UAE on a range of issues of mutual interest. He discussed ways to further strengthen cooperation between the two brotherly countries, possibilities of enhancing bilateral trade relations and promoting investment, in particular in the field of agriculture. The foreign minister also discussed matters pertaining to the welfare of Pakistani diaspora in the UAE. He requested Sheikh Mohammed bin Rashid Al Maktoum to encourage the UAE’s business community to explore immense investment opportunities in Pakistan.

Wishing Dubai Expo 2020 a resounding success, Foreign Minister Qureshi expressed gratitude to the UAE government in enabling Pakistan to participate effectively in the event. Pakistan and the UAE have close and historic fraternal ties. The foreign minister reaffirmed Pakistan’s commitment to further strengthening and augmenting existing strong bilateral relations with the UAE.

Talking to UAE Ambassador to Pakistan Hamad Obaid Ibrahim, who called on him in Dubai, the foreign minister said the UAE always showed its affection for the brotherly country of Pakistan, which was thankful to it for its assistance in various development projects in the country, including the establishment of hospitals. He expressed his belief that the existing close and brotherly relations between Pakistan and the UAE would further strengthen in the days to come.