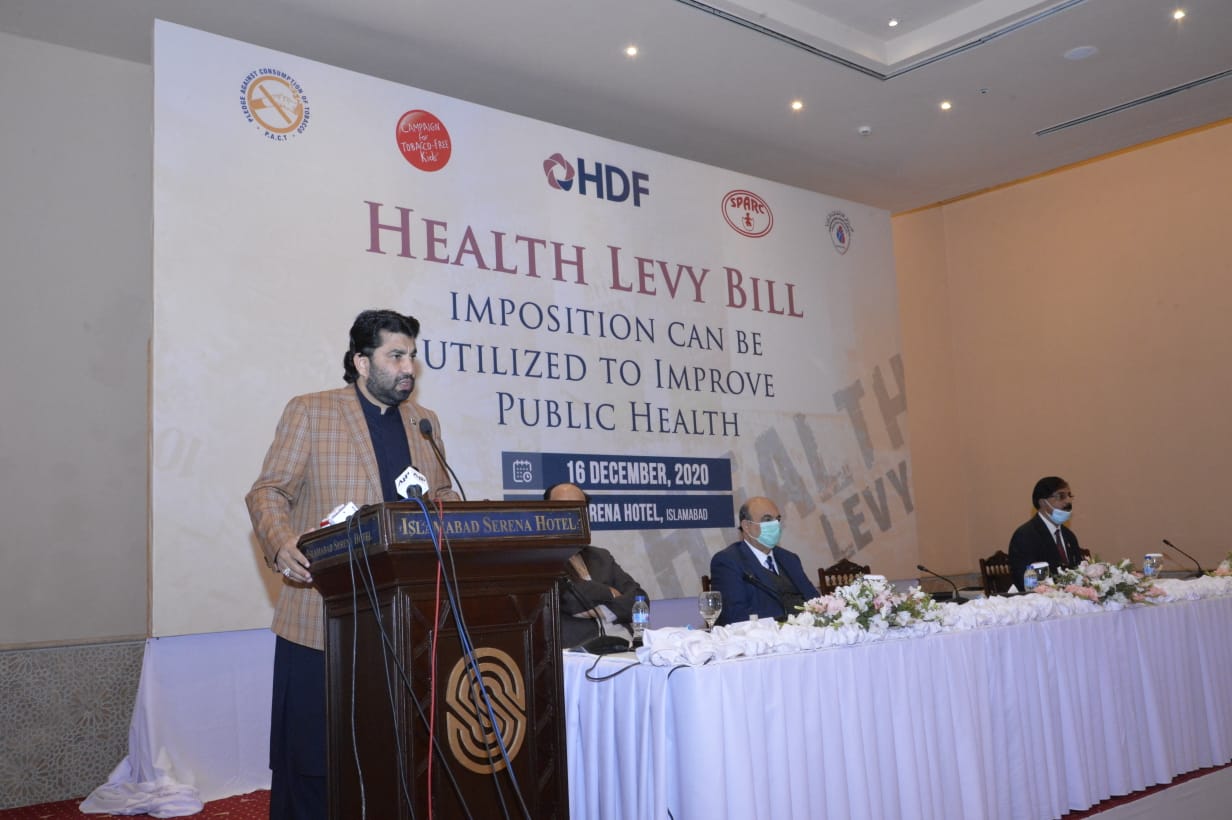 Researches have shown that in most countries, smoking prevalence and rates of smoking related diseases are highest in lower income sections of the society. He further said that tobacco taxes can be a sustainable source of revenue for government’s relief packages for underprivileged persons.

Tobacco control champions urged the government to take notice of the delay in Health Levy Bill and put the health of citizens on priority for a prosperous Pakistan.

Human Development Foundation (HDF) held a Seminar on Wednesday at Islamabad. The event was graced as Chief Guest by Qasim Suri, the Deputy Speaker National Assembly and Dr. Nausheen Hamid, Parliamentary Secretary for Health as the Guest of Honor.

Azhar Saleem, CEO, Human Development Foundation (HDF) stated that Pakistan is among the countries with high tobacco burdens with respect to health. According to Global Adult Tobacco Survey (GATS) lead by World Health Organization (WHO) GATS (2014), 19.1 percent of adults in Pakistan used tobacco in any form, which may translate into a population of over 22 million adults. Consequently, tobacco related diseases are on the rise and according to an estimate, over 160,000 people die every year from tobacco related diseases. According to WHO increasing taxes on tobacco is proven to be the most effective policy to decrease the consumption of tobacco.

Dr. Shahzad Ali Khan, Director Public Health Program, Health Services Academy (HAS) stated that Health Levy (globally known as Sin Tax) is an excise tax on socially harmful goods. An excise tax is a flat tax imposed on each item sold. The most taxed goods are alcohol, cigarettes, sugary drinks etc. Excise taxes are collected from the producer or wholesaler. They drive up the retail price for consumers. In the year 2019-2020 budget, the Cabinet approved the health levy bill on cigarettes and sugary drinks. Under this bill, Rs. 10 per pack of cigarette and Rs. 1 per 250ml of sugary drinks were proposed. Despite being approved by the Cabinet, the FBR never presented the bill in National Assembly. Through this bill, the government could have generated around Rs. 55 billion more in revenues. This revenue amount can be well utilized for supporting the government welfare programs such as Ehsaas Program.

Malik Imran, representative of Campaign for Tobacco Free Kids, stated that last year the federal cabinet had approved the health levy on cigarettes and sugary beverages. ‘However, it could not be included in the finance bills of last year and the current year. As per our calculations, the exchequer has faced a loss of at least Rs50 billion from July 2019 to June 2020, he said.

Dr. Nausheen Hamid, Parliamentary Secretary for Health, stated that WHO has estimated that 100 million people fall into poverty (defined by low food expenditure) annually due to out-of-pocket health expenditures, with much of these expenditures for the treatment of non-communicable diseases. This has major consequences for public health. In Pakistan tobacco consumption costs the health burden worth Rs 140 billion due to cost related to health care and loss of productivity due to pre-mature deaths in 2012.