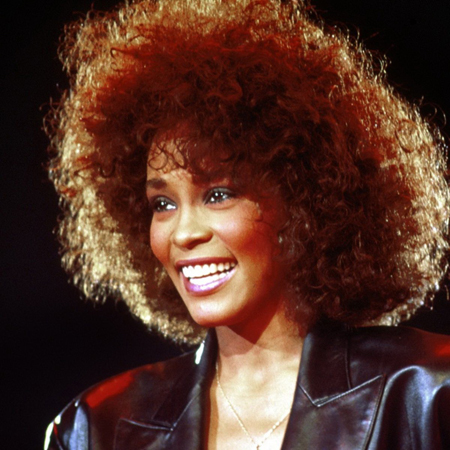 Sony Pictures confirms to E! News that Naomi is in negotiations to star in its musical movie of Whitney’s life, titled I Wanna Dance with Somebody.

The 28-year-old actress already has some big credits under her belt. Naomi appeared in the 2019 film Star Wars: Episode IX – The Rise of Skywalker as Jannah and was originally cast in the Game of Thrones prequel alongside Naomi Watts before it was scrapped.

This year, she won a BAFTA Award for portraying Bonnie in Netflix’s show The End of The F***Ing World.

Director Stella Meghie said the creative team spent most of the past year in “an exhaustive search” for an actress that could best embody Whitney Houston. The Photograph helmer said, “Naomi Ackie impressed us at every stage of the process. I was moved by her ability to capture the stage presence of a global icon while bringing humanity to her interior life.”

Whitney’s manager and sister-in-law, Pat Houston, gave the casting her greenlight, too. “All Whitney fans have an appetite for perfection when it comes to Whitney and her Legacy,” the film’s producer said in a statement. “To transform someone into a matchless Icon is virtually impossible but with careful consideration, Naomi Ackie was selected based on her quality performances and her deep commitment to emerging into the woman that we all loved.”

Director Stella Meghie said the creative team spent most of the past year in ‘an exhaustive search’ for an actress that could best embody Whitney Houston. The Photograph helmer said, ‘Naomi Ackie impressed us at every stage of the process’

Clive explained that Whitney’s “incomparable vocals” are used for all the songs, but it’s Naomi’s “extraordinary acting range” that “enables her to masterfully capture Whitney’s unique charm, star power and, of course, her personal struggles.” He added, “Naomi is the real deal and I can’t imagine a better choice for this iconic role.”

The film is written by Bohemian Rhapsody’s Anthony McCarten and will be released for Thanksgiving in 2022.

Whitney died in 2012 at age 48, following a record-breaking career in music. She was pronounced dead at the Beverly Hilton hotel the day before the Grammys, and her death was later attributed to accidental drowning combined with cocaine use.

The R&B master was nominated for 25 Grammys and won six of them, including for her songs “I Will Always Love You,” “I Wanna Dance with Somebody” and “It’s Not Right but It’s Okay.” Her only daughter, Bobbi Kristina Brown, died in 2015 at age 22. She was in a coma for nearly seven months after she was discovered unconscious in her home bathtub.