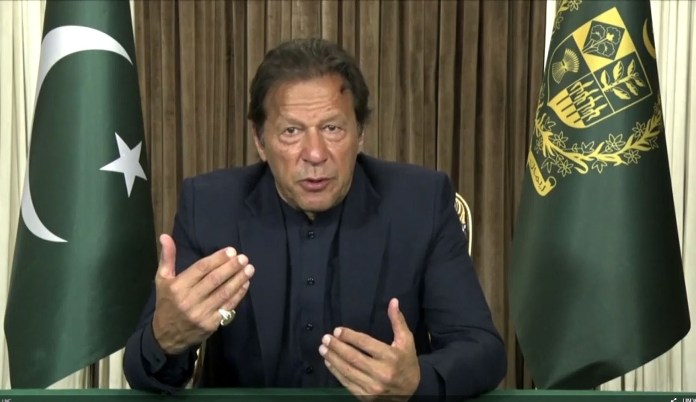 Prime Minister Imran Khan Wednesday hinted at early holding of the Senate elections, saying the government is also mulling over to approach the Supreme Court for conducting the same through show of hands.

Consultations were underway over the legal aspects as the government believed in transparent and fair conduct of the elections, he said while talking to the media here at the Governor House. He said horse-trading in Senate elections remained very easy for the governments in the past, but he expelled 20 provincial assembly members from the Pakistan Tehreek-e-Insaf (PTI) over their alleged involvement in the practice.

Prime Minister Imran Khan said the tragedy of Army Public School (APS) has united the entire nation against terrorism and the supreme sacrifices of innocent students and their teachers had paved the way towards durable peace in the country.

Addressing a function after inaugurating Peshawar Institute of Cardiology (PIC), the prime minister said the matchless sacrifices of innocent students and teachers have united the entire nation against menace of terrorism and held their sacrifices in high esteem on their sixth martyrdom anniversary.

The prime minister along with others participants observed one-minute silence as mark of respect for all martyrs of APS and also offered fateha on this occasion. The prime minister said he feel the pain of families of the victims of APS and expressed solidarity with them. He said December 16 had become a turning point in the national history of Pakistan, uniting the entire nation to defeat terrorism.

Prime Minister Imran Khan said universal health coverage, under Sehat Insaf Cards in Khyber Pakthunkhwa, would eventually revolutionalize the healthcare system and termed it a major step towards welfare state under sublime principles of Riyasat-e-Madinah. He said Sehat Insaf Card was a landmark initiative of the PTI government that could greatly facilitate thousands of poor and weak segments of the society who could not afford spending additional money for their treatment.

The prime minister pointed out that in Riyasat-e-Madinah, the state had the sole responsibility to look after weak and marginalised segments of the society which brought positive changes in mindset of the people. He said health reforms, introduced by the PTI government, were focused to further improve quality of the healthcare system by introducing reward and punishment system at government hospitals on the pattern of private hospitals. “We want to bring government sector hospitals at par with private hospitals in terms of quality treatment by improving its infrastructure and management system through reforms,” he added.

He said the decision to provide health insurance to all citizens would immensely help encourage private sector to construct new hospitals in remote and far-flung areas, knowing that people would come for treatment under Sehat Insaf Cards. He said it was unfortunate that elite class was proceeding abroad for treatment while poor continued to suffer due to lack of financial resources to get quality treatment at private hospitals.

Prime Minister Imran Khan said directives had been issued for provision of lands for private hospitals on reasonable rates, enabling them to expand healthcare facilities to people at their doorsteps.

Referring to misconceptions of health workers at PIMS Hospital Islamabad, he said health reforms were not meant for privatization of the government hospitals in any manner but were solely aimed at improving their performance. He said the objective of health reforms was to operate government hospitals in line with reputable private hospitals which had reward and punishment adding no institution would succeed unless it opted for this system.

The prime minister said the health reforms were meant to improve management system of the government hospitals through constitution of boards of directors on the pattern of private hospitals. He said the highest standard had been set by Shaukat Khanum Memorial Cancer Hospital for public and private hospitals in terms of quality treatment, maintenance and healthcare service delivery and that patients should be given utmost respect.