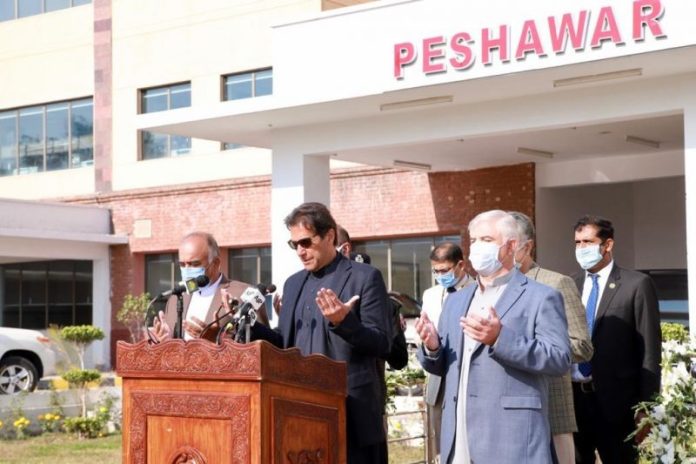 Addressing opening ceremony of 262-bed state-of-the-art Peshawar Institute of Cardiology (PIC), he said Sehat Insaf Cards was a landmark initiative of the PTI Government that could greatly facilitate thousands of poor and weak segments of the society who could not afford spending additional money for their treatment.

Replying to some critical persons, the Prime Minister said in Riyast-e Madinah, the state had the sole responsibility to look after weak and marginalized segments of the society which brought positive changes in mindset of the people.

Universal health coverage to revolutionize healthcare system: PM
He said health reforms, introduced by the PTI Government, were focused to further improve quality of the healthcare system by introducing reward and punishment system at government hospitals on the pattern of private hospitals.

“We want to bring Government sector hospitals at par with private hospitals in terms of quality treatment by improving its infrastructure and management system through reforms,” he added.

The Prime Minister said opening of PIC was a significant project accomplished by PTI Government that would facilitate thousands of heart patients in KP as well as patients from Afghanistan.

Universal health coverage to revolutionize healthcare system: PM
He said the decision to provide health insurance to all citizens would immensely help encourage private sector to construct new hospitals in remote and far flung areas,
knowing that people would come for treatment under Sehat Insaf Cards.

He said it was unfortunate that elite class was proceeding abroad for treatment while poor continued to suffer due to lack of financial resources to get quality treatment at private hospitals, adding Sehat Insaf Cards had given the confidence to poor to get free quality treatment up to Rs one million in case diagnosed with fatal ailments.

Prime Minister Imran Khan said directives had been issued for provision of lands for private hospitals on reasonable prices, enabling them to expand healthcare facilities to people at their doorsteps.

Referring to misconceptions of health workers at PIMS Hospital Islamabad, he said health reforms were not meant for privatization of the government hospitals in any manner but were solely aimed at improving their performance.

He said the objective of health reforms was to operate government hospitals in line with reputable private hospitals which had reward and punishment adding no institution would succeed unless it opted for this system.

The Prime Minister said the health reforms were meant to improve management system of the government hospitals through constitution of boards of directors on the pattern of private hospitals.

The Prime Minister said the highest standard had been set by Shaukat Khanum Memorial Cancer Hospital for public and private hospitals in terms of quality treatment, maintenance and healthcare service delivery and that patients should be given utmost respect.

Giving top priorities to health sector, he said the government had taken the principled decision to facilitate private hospitals in import of medical and surgical equipment. The Prime Minister lauded the KP government for generating funds even in coronavirus crisis by establishing a dedicated heart hospital in Peshawar.

He directed the management of PIC to take extra care of the hospital without any compromise on quality and standards of this specialized heart hospital in KP.