Mushfiqur Rahim apologises to Nasum Ahmed for misbehaving on field 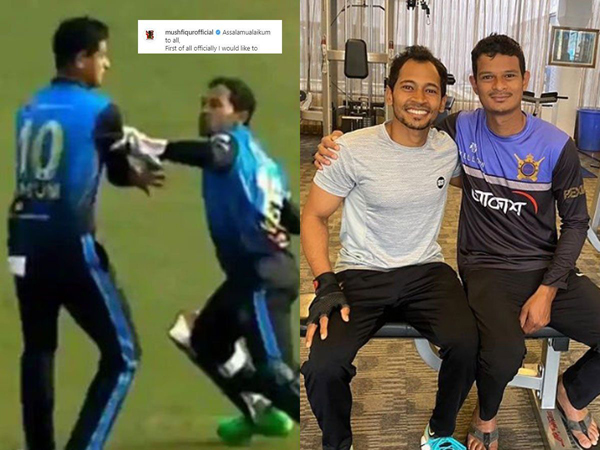 DHAKA: Mushfiqur Rahim has apologised to his Beximco Dhaka team-mate Nasum Ahmed for misbehaving with him twice during the Bangabandhu T20 Cup Eliminator against Fortune Barishal on Monday. In a match that Dhaka eventually won by nine runs, to remain in contention for a place in the final, Rahim’s behaviour with his team-mates, notwithstanding their fielding errors, was bizarre. The Bangladesh Cricket Board (BCB) on Tuesday issued a statement saying Rahim was fined 25% of his match fees for breaching the BCB code of conduct. One demerit point was also added to Rahim’s disciplinary record as he was found guilty of “showing insulting gesture towards a teammate,” the release said. If Rahim reaches four or more demerit points in the tournament, the points will be converted into match suspension and he will be banned.

In the 13th over of the chase, when the Barishal batsman Afif Hossain started counter-attack, Rahim seemed to lose the plot. When the left-hand batsman turned one towards the vacant short midwicket area for a single, both Rahim and Ahmed chased after the ball and after reaching there first, Rahim made a threatening gesture towards Ahmed, seemingly for not reaching before him. Dhaka started to make more errors. Yasir Ali couldn’t cut off and later chase down Hossain’s simple push to cover, resulting in a gifted boundary. Al-Amin fumbled a throw from the deep, with Hossain halfway down the crease. Then when he mistimed a scoop, resulting in a simple catch for Rahim, the Dhaka captain lost it.

Ahmed, fielding at short fine leg, lightly collided with Rahim who was completing the catch, which was enough for Rahim to threaten to throw a punch at his team-mate. Having avoided making an apology at the post-match presentation, Rahim made one on his Facebook page on Tuesday morning. “Assalamualaikum to all, First of all officially I would like to apologize to all my fans and spectators regarding the incident that happened yesterday during the match,” Rahim wrote. “I have already apologized after the game to my fellow team mate Nasum. Secondly I seek forgiveness from Almighty. I always remember I am a human being above all and the gesture that I have shown was not acceptable at all. In shaa Allah in near future I promise it won’t be repeated on the ground or outside the ground….JazakAllah khair.”