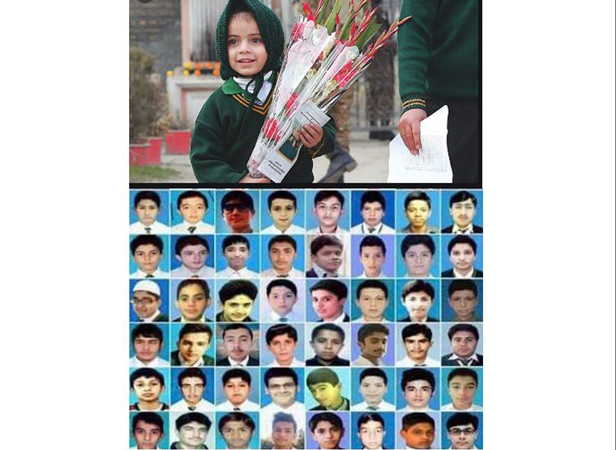 Internationally renowned security technologist and writer of more than 12 books, Bruce Schneier defines it as ‘terrorism itself is not a crime against the people or property, it is a crime against our minds, by using the death of innocents and destroying our property they try to make us extremely fearful.

Subsequently, when we dare to refuse to be terrorized, and when we are indomitable in the face of terror, the terrorists fail even if their attacks succeed, he writes.

The nation is marking today the sixth anniversary of the Army Public School (APS) Peshawar’s carnage on December 16, 2014. A total of 150 people including 133 children and 17 staff members of the APS were martyred on the day, when armed terrorists wearing paramilitary uniforms, belonging to Tehreek-e-Taliban Pakistan (TTP) entered the school premises to carry out the horrific attack.

In APS, more than 1,000 students, from preschool to high school, were present on the day, when the terrorists opened indiscriminate fire on the innocent students and teachers while entering classrooms and auditoriums killing young students and teachers. However, since then the country is witnessing a shift in public opinion on the country’s struggle against terrorism.

Azad Jammu and Kashmir (AJK) President Sardar Masood Khan while talking to APP in connection with Army Public School’s young martyrs’ day said that Pakistani nation had rendered unprecedented and heavy sacrifices in war against terrorism and had always taken prompt and indiscriminate actions against any form of extremism.

He said that Nation today was more determined by reiterating its pledge to root out terrorism and extremism in all its manifestations and ranks from our country.

The grief stricken, parents of innocent children still vigil candles in memory of their beloved children to pay them love and homage.

Being an eyewitness of the terrorist’s attack, Aakif Azeem, a survivor of the APS carnage, told media while sharing his feelings that on that day, though he was grief stricken, but despite lacerated feelings attended nine funerals of his classmates with courage, even though more than 15 boys died from his class alone.

“I would never forget the ‘feelings’ of attending the funeral of my best friend Zain Iqbal,” he said, adding they were used to going to school together every day, because Zain was also a close resident of his locality. “On the day, “I did not have the courage to see his body,” he expressed with tears in his eyes.

It may be mentioned here that during 2010 to 2014, Pakistani nation faced several deadly terrorist attacks by the Tehreek-i-Taliban Pakistan (TTP) including Kamra Air Base, Mehran base, Jinnah International Airport and APS carnage, which however radically changed Pakistani perspective and the course of action on counter terrorism operations.

Following a unanimous resolution which was passed by Pakistani Parliament in support of the Operation Zarb-e-Azb,’ Pakistan Army launched a military operation against local and foreign militants in North Waziristan Agency (NWA) on June 15, 2014, which was fully backed by the government as well as the civil society.

The operation was given a well thought out title, ‘Zarb-e-Azb’, after the name of the sword of Prophet Muhammad (PBUH). Noted Defence analyst Dr Maria Sultan while talking to APP lauded the role of Pakistan Army saying, “in countering terrorism our forces even today, are bravely standing with the nation in a more determined and more affirmed manner.”

“Despite tragic deaths and injuries of thousands of military personnel, civilians and colossal damage to the economy of the country, our forces and nation had replied to the terrorists in a befitting manner, “she said. It may be mentioned here that Chief of Defence Staff of the United Kingdom(UK), General Sir Nicholas Patrick Carter during his recent visit to Pakistan while holding a meeting with Chief of the Army Staff Gen Qamar Javed Bajwa had acknowledged Pakistan Army’s continued efforts for regional peace and stability, and lauded the achievements in the fight against terrorism.