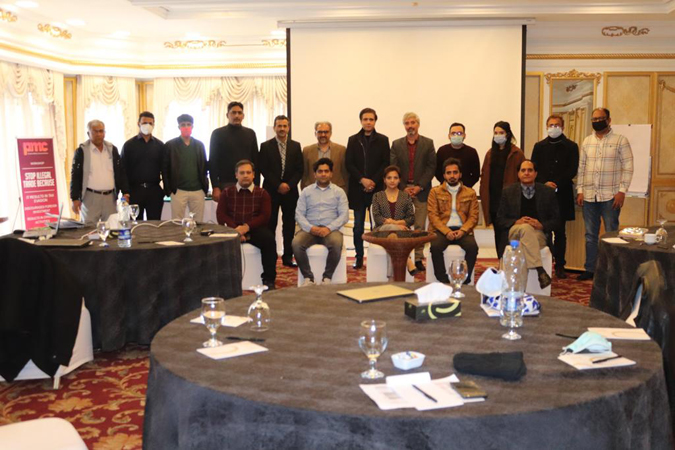 Illegal trade is a menace that is on the rise across Pakistan and needs to be dealt with seriously. It leads to tax evasion, criminal activities and discourages legitimate businesses from operating. Often, this happens with authorities looking the other way rather than punishing the culprits.

To shed light on these problems and discuss their solutions, the Positive Media Communications (PMC) hosted a two-day media workshop titled “Fake news, illegal trade and pandemic” in collaboration with Stop Illegal Trade.

Khan said that the size of the informal economy in Pakistan has swelled to an estimated 56% of the country’s GDP. He highlighted that enforcement measures on the other hand were too little adding that it was surprising how law enforcement agencies had been able to seize only 5% of the amount of goods smuggled into Pakistan adding that effective border management was the key to deal a blow to the shadow economy and increase tax revenues for Pakistan. Khan shared some alarming statistics of the market share of smuggled goods in Pakistan highlighting that 74% of mobile phones available in Pakistan and 20% of cigarettes in the country are smuggled.

Khan stressed on the need for providing ease of business to investors instead of creating impediments and complications in their paths. People in Pakistan choose to conduct their businesses in cash as it is easier to do so and avoid the hassles that come with a digital method of doing business.

While talking about Media’s coverage of illegal trade and how it can be improved, Jamshed Baghwan, KP Bureau Chief of the Express News, Daily Express and The Express Tribune quoted the interesting details of how businessmen who wanted to export fruits from Pakistan to Afghanistan were harassed by authorities which discouraged investment and legitimate businesses.

He spoke of how daily trucks laden with potatoes, vegetables and other items are smuggled with authorities deliberately looking the other way. Participants agreed when Mr Baghwan stressed on the need for more oversight on the Pakistan-Afghanistan border, which the speaker said was porous and largely ineffective in containing smuggling.

On the media’s coverage of the coronavirus pandemic, Baghwan stressed the need for more in depth on illegal trade and the loss of revenue to the country and asking the right questions about progress on bringing illicit businesses under the tax net.

Salman Masood, Editor of The Nation and correspondent for The New York Times highlighted the consequences and threats posed by fake news for society and the media industry in general. He spoke at length about the importance of training of journalists to distinguish between real news and fake news and how the media industry can to put a chokehold on it.

Interesting questions were raised by members of the audience on the nature of fake news, training of media personnel to identify it and how to stop incentivizing it were discussed.

Ahmad Waleed, experienced broadcast journalist and Controller News Channel 24 stressed on reporting during the pandemic especially need for reporters on ground to be careful in practicing coronavirus SOPs. CEO Positive Media Omar Quraishi appreciated the participants’ interest and their questions.