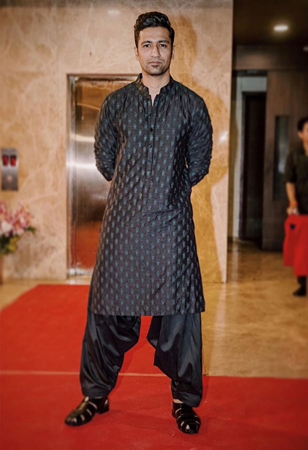 Actress Vicky Kaushal says he is a huge admirer of Saif Ali Khans fashion sense. “I am a huge admirer of Saif Ali Khan saab’s fashion sense because I feel he is regal, elegant, and the moment he wants to dress down, his casual wear sense is also on point. I feel he is always in a really good space whenever and whatever he wears,” said Vicky, talking about who is his choice for the best-dressed celebrity in Bollywood.

Vicky was interacting with the media at Lakme Fashion Week, where he walked the ramp for designer Kunal Rawal.

Vicky was interacting with the media at Lakme Fashion Week, where he walked the ramp for designer Kunal Rawal

Talking about his rampwalking experience, the actor said: “This is my first year at Lakme Fashion Week and I am so happy that I got to collaborate with Kunal. We have been trying to collaborate since the past few years. I am happy that in this season, I walked the ramp for him not once but twice. I think our aesthetics match. I have always been fascinated by his work.”

Vicky Kaushal will next be seen in “Bhoot Part One: The Haunted Ship”, a horror-thriller film directed by Bhanu Pratap Singh and jointly produced by Karan Johar, Hiroo Yash Johar, Apoorva Mehta and Shashank Khaitan.

The film is scheduled to release on February 21.