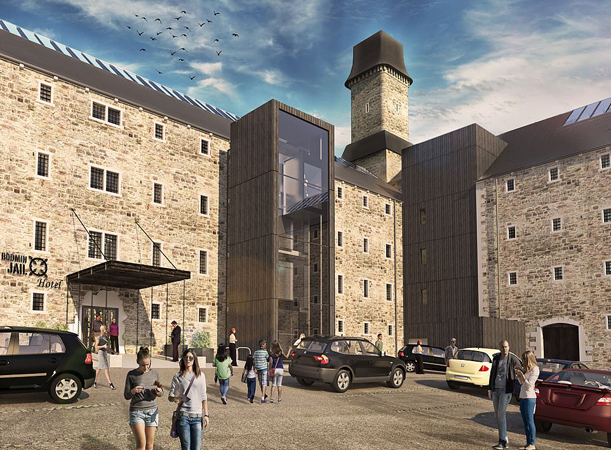 We know, 2020 has been a rotter for holidays. But hang in there, because 2021 is nearly here and there are some incredible new hotel openings in England to get excited about, from a converted former Cornish jail to a swanky hotel housed inside a former courthouse and from a London hotel with a jaw-dropping infinity pool to a glamping site in a tranquil forest.

Get ready to bed down in style in the New Year…

THE BODMIN JAIL HOTEL, CORNWALL — The ruins of the 18th-century Bodmin Jail in Cornwall are being transformed as part of a £40million renovation project into what promises to be a criminally good hotel. The first part of the project, an immersive visitor attraction, opened on October 1. Bodmin Jail Hotel is scheduled to open on February 12, 2021, and will feature 70 chic rooms that pair original features from the historical jail, such as exposed stone cell walls and window bars, with modern luxuries like Egyptian cotton-clad beds and freestanding baths in the bathrooms. An ‘exciting’ new restaurant concept is also due to open within the hotel, giving guests the chance to indulge in a traditional afternoon tea or sample some ‘hearty British classics’.

THE CARLTON TOWER, LONDON — the Carlton Tower Jumeirah in London’s swanky Knightsbridge will reopen in early 2021 following an eye-watering £100million renovation. And what has the cash been splashed on? ‘All new exquisite interiors,’ says the hotel. It adds that guests will be booking into ‘a refined modern classic completely reimagined as a beacon of sophistication’. Highlights that sound promising include a new ‘destination’ bar and a restaurant featuring an ‘immersive theatre kitchen’. We recommend reflecting on the no-doubt-impressive changes while bobbing about in the glass-ceilinged 20m swimming pool.

The NoMad London — located on the site of the old Bow Street Magistrates Court and Police Station, the NoMad London hotel is set to open its doors for the first time on February 8, 2021. The hotel will be the first NoMad to open outside the United States and it will feature 91 bedrooms and four bars and restaurants. One, the grand NoMad Restaurant, is set inside a landscaped atrium with a soaring glass ceiling. Another highlight will be The Magistrates’ Ballroom – a ‘spectacular’ private event space that has been created within the building’s original Magistrates’ courtroom and features chandelier lighting and walls painted with murals. A museum with rotating exhibitions, meanwhile, will honour the history of the Metropolitan Police Force.

THE PAN PACIFIC LONDON HOTEL — the first Pan Pacific brand hotel to arrive in Europe, Pan Pacific London will be set inside the 43-storey One Bishopsgate Plaza tower, near Liverpool Street Station, with its highest suite on the 18th floor. The hotel will offer 237 guestrooms and suites, where the interior design is said to fuse influences from both Britain and Singapore, where Pan Pacific has its headquarters. The entire fourth floor of the hotel has been dedicated to wellness. The highlight of this space will be the 18.5-metre infinity pool, which will serve up views of bustling Bishopsgate Street below. A specific 2021 opening date has yet to be announced. Visit www.panpacific.com/en/hotels-and-resorts/pp-london.html.

THE HARPER, NORFOLK — set in a former glass-blowing factory in the village of Langham, The Harper will welcome its first guests in March 2021. The hotel has been designed to reflect its heritage, so there is plenty of glass and other natural material in the 32 bedrooms that will come in sizes ‘Big’, ‘Bigger’ and ‘Biggest’. The hotel – which is being billed as ‘appealingly unstuffy’ – will also be home to a bar serving a menu of ‘bite-sized British dishes’ like Norfolk lamb sliders and sharing platters, a laid-back loft lounge space serving drinks and a casual menu, and a fine-dining restaurant called Stanley’s, after the owner’s grandfather.

THE LONDONER, LONDON — the Londoner in Leicester Square is calling itself ‘the world’s first super boutique hotel’ because it’s ’boutique in feeling yet staggering in scale’. The hotel’s 350 guest rooms will be spread across 16 storeys and include a range of suites that look out over Leicester Square on one side and Trafalgar Square on the other. The Londoner will also be home to six concept bars and eateries including a tavern and a contemporary Japanese lounge bar with a rooftop terrace and fire pit. Plus, there will be an underground spa called The Retreat, where guests can relax in private poolside cabanas when they’re not getting pampered. What’s more, it’s claimed that ‘it will be one of the greenest hotels in the world when it opens its doors next year’. The hotel is hoping to open in April 2021 and take bookings in March. Visit www.thelondoner.com.

DELAMERE FOREST CABINS, CHESHIRE — on April 2, 2021, a new collection of 67 plush ‘light-footprint’ cabins by Forest Holidays will open in the 2,400-acre Delamere Forest in Cheshire. The ‘White Willow Cabins’ – the first-ever accommodation in the forest – will come with bi-fold doors that are designed to flood the rooms with natural light and spacious decking areas crowned with hot tubs and pizza ovens. Visitors will be able to choose between two or three-bedroom cabins, all of which will come with fluffy robes and hot tub robes for guests. Bookings are being taken now. Visit www.forestholidays.co.uk/locations/cheshire/delamere-forest.

THREE MILE BEACH SELF-CATERING LODGES, NEAR ST IVES, CORNWALL — the creators of the new beach houses at Three Mile Beach near St Ives describe their new offering as ‘holiday home comfort in the wilds of Cornwall’. Set to open in April 2021, each of the 15 ‘hygge design’ two-to-four-bed beach houses will come with an open-plan kitchen lounge area, log burner, and private decking area with a sunken cedar hot tub and barrel sauna. While the houses will come with everything visitors need to cook themselves, a private chef service will be available, plus visits from a street food van.

THE GRADUATE, OXFORD & CAMBRIDGE — America’s Graduate Hotels – whose slogan is ‘we are all students’ – has dozens of properties in Stateside university towns. And from spring 2021 its schoolhouse chic will be arriving on British shores for the first time with two new openings in the country’s greatest university cities. The Graduate Cambridge will be located on the banks of the River Cam, housed within the former Doubletree by Hilton, and feature 148 rooms and a cafe bar and restaurant, all redesigned so that they ooze the brand’s signature collegiate charm. The Graduate Oxford, meanwhile, will be close to buzzy St Giles Street and feature 151 rooms with interior designs inspired by the University of Oxford’s storied innovators and alumni.

GLAMPING AT THE WAVE, BRISTOL — the inland surfing destination The Wave in Bristol will launch its new collection of glamping tents in 2021, with each tent sleeping up to 10 people. The tents will be located a matter of metres from The Wave’s huge safe surfing lake, so visitors can be surfing within moments of getting up in the morning.