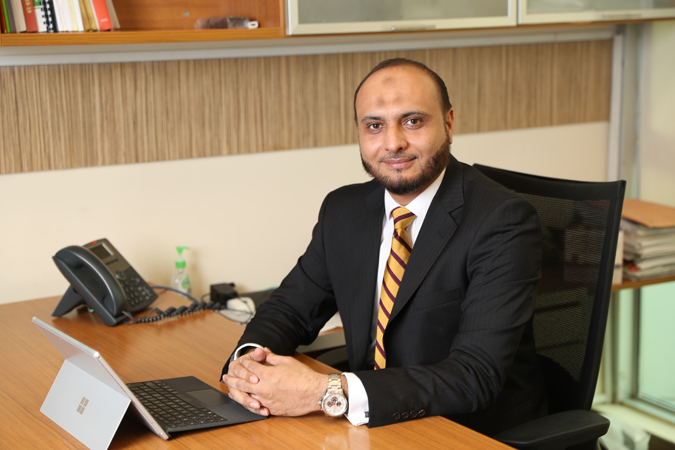 K-Electric Chief Financial Officer Muhammad Aamir Ghaziani spoke to Daily Times and threw light on different endeavours of the company to ensure uninterrupted power supply to the people of Karachi. In the wide-ranging interview, he also spoke about different challenges being faced by the company.

What is behind the under-utilization of KE’s gas-based power plants, as the issue keeps resurfacing every year? Every now and then, we see KE and SSGC throwing barbs at each other. Is it not in KE’s best interest to once and for all, lay out the facts, if there are any contracts that SSGC violates?

Power plants require defined gas pressure and volume to operate optimally; this is based on manufacturing / designed standards for the installed gas turbines. If either – the gas pressure or volume – falls below the minimum threshold required, KE is not able to utilize its gas-based plants at optimum level, and thus a power shortfall occurs which is outside KE’s control. KE faces severe gas pressure issues at three KE generation plants located at Korangi, Ibrahim Hyderi and SITE, which combined result in a power shortfall of up to 350 MW in the system. KE remains in constant communication with its fuel providers and the requirement of adequate gas pressure has been consistently highlighted as a constraint that must be urgently addressed and the same has been raised by KE with concerned stakeholders at government level. Investments on these plants were made after the required gas allocation and approval from ECC with due consideration by NEPRA at the time of issuance of generation license.

Furthermore, SSGC has assured the Ministry of Energy that it will come up with a plan to resolve gas pressure issues before next summer as it would be critical to manage peak demand during summer.

Regarding the Gas Supply Agreement (GSA) with SSGC, K-Electric remains committed to sign a GSA for gas quantities on firm basis and gas pressure within design limits of KE’s power plants, in line with the decision of the Cabinet Committee on Energy (CCoE) dated April 23, 2018.

How true is the notion that KE on purpose refrains from running power plants on furnace oil, as noted in one of the NEPRA reports?

K-Electric operates its power plants in line with the Economic Merit Order to meet the power demand. As per the tariff mechanism, fuel cost is a pass-through item, accordingly, there is no incentive for KE to purposefully refrain from operating furnace oil based power plants if demand exists, and it must be appreciated that the recent power supply crisis was mainly due to shortage of furnace oil supply which was a country-wide issue. During FY 20, despite subdued power demand due to COVID-19 lockdown, over 730,000 MTs of furnace oil (over PKR 45 Billion) was consumed. Therefore, the perception of underutilization of furnace oil based plants by KE is contrary to the facts and ground realities.

Further, as part of our future investment roadmap, KE is adding 900 MW RLNG based efficient generation capacity which also diversifies KE’s fuel mix towards RLNG – a cleaner and cost-effective fuel. In addition to this, KE is also upgrading its transmission capabilities with a view to evacuating additional power from the national grid. In parallel we are also combatting power theft through our loss reduction initiatives and flagship Project Sarbulandi with the vision of significantly eliminating load-shed.

Has the situation improved/deteriorated as regards the timely payments of subsidy on part of the federal government?

We appreciate the release of PKR 31 Billion from the Government of Pakistan on account of GoP receivables in 2020, as also disclosed in Annual Report 2020. However, despite this release, KE’s net receivables from the Government of Pakistan and various government entities stand at around PKR 80 bn on principal basis including dues from the Karachi Water & Sewerage Board and Tariff Differential Claims. This issue of mounting government receivables has forced KE to resort to increased borrowings to fund operational and working capital requirements, which was among the main drivers of increase in company’s finance cost to PKR 16.737 billion in FY 20, and consequently the company posted a net loss of PKR 3 bn in FY20.

With the 900 MW power plant located at Bin Qasim upcoming in 2021 and transmission upgrades to evacuate additional power supply from the national grid underway, the power utility’s financial needs have burgeoned. The issue of government dues has serious ramifications for Karachi’s power outlook as the power utility is aggressively pursuing a USD 1.5 billion capital expenditure plan across the power value chain in next three years. If the vertically integrated power utility won’t have the money to operate power plants at full capacity and undertake required initiatives in the T&D segment, and its ability to access cost-effective financing is hamstrung, then the impact will cascade onto Karachi, consequently denting the country’s ability to meet its socio-economic priorities. Despite this payment stand-off, KE continues to prioritize power supply to KWSB pumping stations in recognition of their importance to Karachi and ensures payments of monthly bills to its fuel suppliers including SSGC, PSO and IPPs to ensure continuity of business operations. But the situation is obviously unsustainable, where KE continues to make timely payments but legitimate dues owed to the power utility are delayed, damaging organizational sustainability, affecting KE’s liquidity and potentially deterring the continuous infrastructure investment that the city’s growth needs.

Will the system be better off if KE takes more power from the grid instead of producing more expensive power? How big are the power evacuation issues in the transmission system?

Firstly, I am pleased to share that KE is pursuing its 900 MW RLNG project in combined cycle mode having efficiency of around 60% which would not only help KE diversify fuel mix, but also do away with expensive furnace oil based generation to a large extent. First unit of 900 MW RLNG Project is expected to come online by summer of 2021 and project completion by end of 2021.

In addition to the 900 MW RLNG Project, given the uncertainty in continuity of supply from National Grid back in 2015 / 2016, KE’s planned projects included a 700 MW coal project in an IPP mode. However, due to significant incentives to invest in power generation under Power Policies in the past, the National Grid is now in a surplus position from generation perspective, and therefore based on discussions with GoP, KE is now pursuing off-take of additional 1,400 MW from the National Grid, instead of its 700 MW Coal Project. This will not only meet Karachi’s growing power needs in KE’s service area but also reduce the burden of idle capacity payments which has been a major driving factor of circular debt at national level.

However, it is important to highlight that KE operates under a cost-plus tariff regime, and the power utility is in continuous engagement with NEPRA to allow related investments in tariff, as any delays in required approvals would have a consequential impact on timely completion of these initiatives.

What are the reasons behind KE’s consistently high T&D losses, over and above the allowed target under the MYT?

Let us look at this holistically. To say that K-Electric has consistently high transmission & distribution losses is a statement that lacks context, especially if seen in the backdrop of Karachi’s power supply situation before the power utility’s privatization. Since 2005, KE has invested over USD 3.3 Billion across its business segments of generation, transmission and distribution. These investments, which include almost USD 2 billion in transmission and distribution segments, have enabled KE to reduce T&D losses by around 14.5 pp since privatization. This is above the industry average where other DISCO’s have either seen a stagnation or increase in their T&D losses, as reported by NEPRA in State of Industry Reports. The significant improvement in T&D losses of the company has resulted in over 75% of the service area now being load-shed free, up from around 6.6% in 2005, with 100% exemption to industries.

Furthermore, up till the third quarter of FY 2020, T&D losses were reduced by a further 2% points as compared to the same period last year (FY 2019). However, significant drop in demand from industrial and commercial segments owing to the COVID-19 lockdown, along with corresponding increase in consumption of high loss areas on the back of load-shed exemption and inability to carry-out theft detection activities, T&D losses by the close of FY 2020 were 19.7% as compared to 19.1% in FY 2019.

The journey does not end here. More than 40% of Karachi is unplanned with rampant power theft and the residents belong to low-income households, hence the propensity to pay is very low. This is a prominent challenge for KE. We accepted this challenge and initiated a three-year, PKR 10 Billion upliftment and infrastructure development initiative named Sarbulandi.

Is that because it is now increasingly difficult beyond this point to reduce the losses? Is this Karachi’s natural T&D loss rate?

Undertaking business activities in Karachi comes with its own set of unique operational complexities. Power theft, both through illegal abstraction through kundas or via non-payment of bills are a national issue, not just limited to Karachi. Karachi, being mostly unplanned and comprising illegal settlements and shanty towns, is particularly challenging to operate in because of encroachments and other logistical issues posed by these areas that KE also serves.

K-Electric has responded to these challenges with some unique fixes. But yes, there is a requirement for collective efforts – by all stakeholders – to overcome this challenge and create a more sustainable operating environment for consumers and businesses alike. The lack of strict enforcement of anti-theft measures by law enforcement institutions and penalties by the legal system is also a concern as well as a deterrent to the long-term efficacy of KE’s own efforts to curb theft.

What will it take for KE to be able to take power from private power plants located around Karachi?

In addition to supply from own sources, KE has arrangements with external power producers including the National Grid, Tapal Energy and Gul Ahmed Energy, etc. In last 4 years alone, KE has added over 400 MW from external sources to its system, which includes 250 MW of renewables. Further, KE’s planned additions going forward include around 350 MW of renewable projects under IPP mode, and in this respect, new solar projects having installed capacity of 150 MW have been planned in Balochistan region. Moreover, in addition to off-take of additional supply from National Grid, KE is willing to explore further options in the interest of ensuring uninterrupted power supply to our customers, subject to techno-commercial evaluation.

Where does the issue with Shanghai Electric Power (SEP) stand? Has meaningful investment in generation and distribution stalled due to the ongoing government vs SEP issue?

Shanghai Electric Power (SEP) is a strategic investor and has expressed keen interest to invest in K-Electric and Karachi. However, despite a lapse of four years since the signing of Definitive Agreement, required GoP approvals are still awaited, for which discussions are in progress.

We hope that the Government of Pakistan (GoP) will seriously consider the long-term benefits of this move and expedite the approval process. SEP has proven track record and expertise with an accelerated investment plan for Karachi’s power infrastructure.