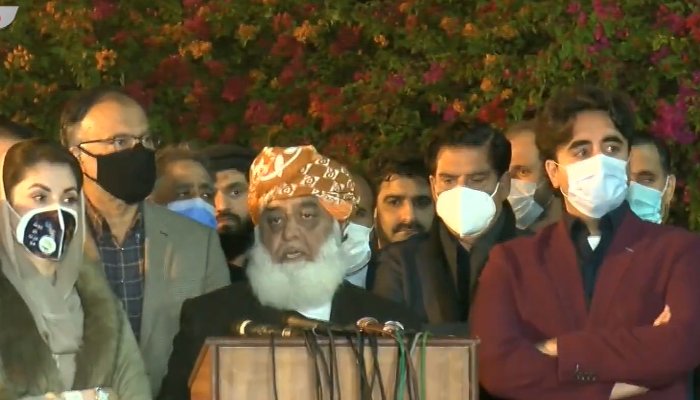 The Pakistan Democratic Movement on Sunday announced a long march to Islamabad by late January or early February.

The announcement by the opposition alliance came during a rally at Minar-e-Pakistan in Lahore. In her address, PML-N Vice President Maryam Nawaz urged supporters to answer the call for a march towards Islamabad, while PPP Chairman Bilawal Bhutto-Zardari formally announced that the movement is now headed to Islamabad. PDM chief Maulana Fazlur Rehman said the march will take place late January or early February.

“Who would say in their pharoah-like tone that the PML-N should dare and fill the venue? To them I say: Come and behold this full venue. The entire area surrounding the venue is full,” Maryam said, while welcoming supporters to the gathering. “Thousands could not find space here,” she said. “I have received word that the media is being told to portray as if the rally failed. I know who is making these calls,” Maryam said, adding: “The people of Lahore have thrown this anti-people government off from the heights of Minar-e-Pakistan.”

The PML-N vice president also played two sets of videos, showing all of the promises made by PM Imran Khan, when the PTI held a jalsa, right under Minar-e-Pakistan. Counting all of the premier’s promises made pre-election, she asked whether all the hospitals and universities that were promised ever came to fruition. “He used to say that PM House and Governor House would be turned into a university. But did it happen?” She lamented the mismanagement at Khyber Teaching Hospital where six lives were lost due to a lack of availability of oxygen tanks.

Maryam said that the prime minister would say he will never take a loan. “I will not beg,” she said, quoting him. “When he does not have an answer to Nawaz Sharif’s words, he says Nawaz Sharif is a traitor.” “Tell me, are any of Nawaz Sharif’s demands unconstitutional?”

Maryam said that Imran Khan is only worried about “saving his job”. She urged the people, “Promise me, if you have to march towards Islamabad, you will march.”

Bilawal began his address by saying the PPP’s foundations were laid in Lahore by party founder Zulfikar Ali Bhutto. He paid tribute to all those who had died in Lahore but never bowed to dictators. He said that PDM is reaching out to every town and village. “Things are in a dismal state with today’s incompetent, illegal and unqualified government. People have nothing but curses in their hearts and on their lips.”

The PPP chairman said that these “fools have no clue or wisdom about history”, adding: “When have we ever feared dictators? We have burned all our boats.” He said that when the people band together in a show of force like today “chains of oppression are broken”. “Your victory is near,” he said, to a roaring crowd.

He said that although students, traders, doctors, and shopkeepers are all in deep distress, the future of Pakistan is bright. “The government cannot feel the pain of the people because they did not come through your vote. This is not the choice of the people.”

Bilawal said that the “biggest joke” was being pulled with Punjab, where the “fake government” has no concern for the people’s rights. “In the city of lights there is nothing but darkness,” he added. The PPP chairman said that PDM stands by the people of Lahore. He said that it is the platform’s demand to free Opposition Leader Shahbaz Sharif and PPP’s Khurshid Shah.

The PPP chairman said that all the opposition parties have put aside their political differences and are standing together on the platform of PDM. He said this was done “so we can restore your rightfully chosen leaders”.

JUI-F chief Fazlur Rehman saluted the crowd’s passion and enthusiasm. “The resolve that you have shown will prove to be a milestone in history,” he said. “The country is currently ruled by an illegitimate government,” he said. The PDM chief vowed that the government “will be of the people”. “This system of rigging will no longer work.”

Fazlur Rehman said that people’s emotions are now turning to that of anger and resentment. He said the entire movement is aimed at securing stability for Pakistan.