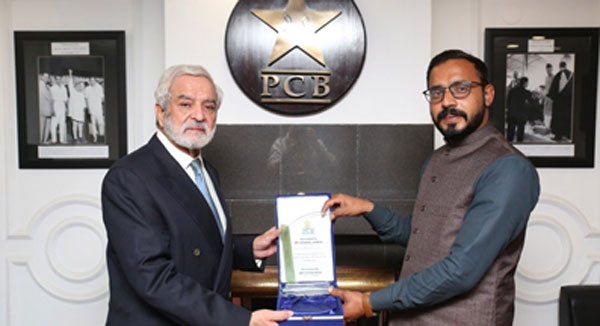 LAHORE: The medal, which was awarded to Pakistan’s current Prime Minister Imran Khan in 1987, has been donated to the Pakistan Cricket Board (PCB)’s museum by a person named Shakeel Ahmed. PCB’s Chairman Ehsan Mani conveyed his gratitude to Shakeel at the Gaddafi Stadium in Lahore for his splendid gesture here the other day. The captains of India and Pakistan in 1987, which were former all-rounders Kapil Dev and Imran Khan respectively, were awarded medals after the completion of the golden jubilee of Cricket Club of India (CCI). Shakeel had found Imran’s medal in a worn-out condition, ten years ago, and was approached by the PCB when he revealed the details about it during an interview. “I have been collecting memorial coins, notes and tickets for the last 15 years. I found this medal 10 years ago. When I found it, it was in a very bad condition. Upon cleaning, I found the name Imran Khan written on it,” said Ahmed. “When I tried to find more about it, I found that it was given to both captains of India and Pakistan by CCI in 1987. Because of its importance, I had decided to give it to the PCB. I met PCB officials through a friend. I am very happy that this will now be safely kept in the PCB’s museum,” he added.