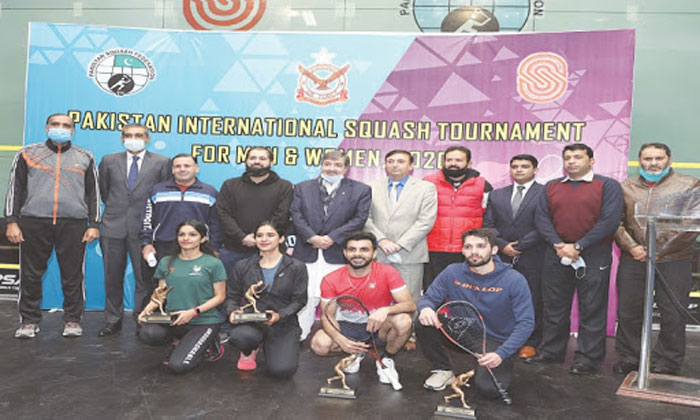 ISLAMABAD: Top seed Tayyab Aslam and Madina Zafar won the men and women’s titles respectively after nail-biting contests in the Pakistan International Squash Tour­nament here at Mushaf Squash Complex on Friday. In men’s final, both Tayyab and his smart opponnet Nasir Iqbal exhibited excellent show of skills and gave tough time to each other from start to end in five sets that lasted for 68 minutes. Tayyab took a good start and won the first set 11-7. But in next two sets, he was supervised to see Nasir Iqbal’s aggressive game. Nasir won next both sets in fashion 11-6 and 11-3. However, in fourth set once again both players played aggressively but inform Tayyab managed to finish 12-10 to push the match into decider, where again after close contest he managed to win 13-11 set and final. The final match was one of the most exciting encounters of the championship. Currently, Tayyab Aslam is top ranked player of the country and before this championship he had 43th international ranking and now after winning this international event worth $ 12000, according to Secretary PSF Tahir Sultan, he will get some five to six ranking points.

Meanwhile, in women’s event, third seed Madina Zafar, who moved into final after defeating top seed Amna Fayyaz continued her winning streak and upset her elder sister and second seed Faiza Zafar in the final that lasted for 31 minutes. Both sisters played aggressive game in the well contested five-set match which ultimately won by Madina Zafar with game score 11-8, 11-1, 2-11, 7-11, 11-9. Squash legend Qamar Zaman, who is also Vice President of Pakistan Squash Federation was the chief guest at the closing ceremony and gave away trophies and prizes finalists of both men and women event. Speaking to Dawn, Secretary PSF Tahir Sultan said that overall performance of players remained very good in the championship. “Seniors and juniors players played good game. Juniors Hamza Sharif, Noor Zaman and Farhan Hashmi also showed excellent talents, so we are hopeful these players will play positive game in upcoming international events,” he said.