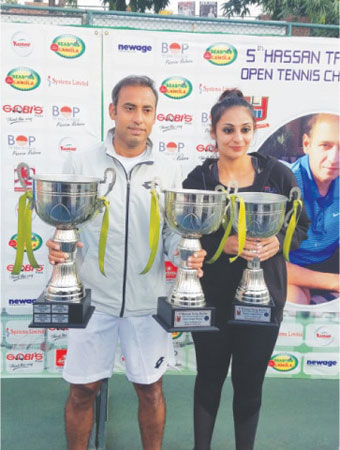 LAHORE: Top seed Aqeel Khan and Ushna Sohail won the men’s and women’s singles titles in the fifth Hasan Tariq Open Tennis Championships here at Lahore Gymkhana on Friday. The 40-year-old Aqeel, who won all his matches of the championship till the semi-finals in straight sets, maintained its supremacy in the final too outclassing young Muzammil Murtaza 6-3, 6-4 in just 35 minutes. Though Muzammil, 21, did offer some resistance in the early stages of each set but found Aqeel too strong to handle in what proved to be a lop-sided contest.

Muzammil also made some unforced errors on different occasions to concede points. Meanwhile, Ushna toppled Sarah Mehboob in the women’s singles decider for the second consecutive time in Lahore during the current season. The 27-year-old Ushna, who had defeated Sarah, 29, in the Malik Shaharyar Memorial Tennis Tournament final at Bagh-i-Jinnah last month, again got the better of her opponent as she comfortably clinched the title match 6-1, 6-2. After the final, Aqeel said he was happy over winning both singles and doubles titles and enjoyed his game throughout the event. Aqeel added that keeping himself fit enabled him to remain on winning track at the age of 40. “Unfortunately, the country is now facing a dearth of international players,” he lamented.

Ushna said her second consecutive victory in the final over a highly talented opponent like Sarah had boosted her morale, adding “now I am confident to earn more victories”. Aisam-ul-Haq, Pakistan’s international prodigy and doubles specialist, also witnessed the finals. The 40-year-old seasoned player who is currently recovering from health problems, vowed to resume his international career by participating in the Australian Open. The men’s and women’s singles winners earned Rs150,000 each while runner-up players received Rs75,000 apiece.